How to Cope with a Friendship Breakup

In Amy Spalding’s newest release, We Used To Be Friends, James and Kat go through a friendship breakup. Friendship breakups happen to everyone, at some point or another, and they’re never easy. Whether it’s an explosive ending or it fizzles out, it’s always difficult to lose someone you felt a close connection to, told secrets, and made memories with. And not only is it difficult for the two friends involved, it’s complicated for any mutual friends who get stuck in the middle. So we have some tips for getting through a friendship breakup like James and Kat do. 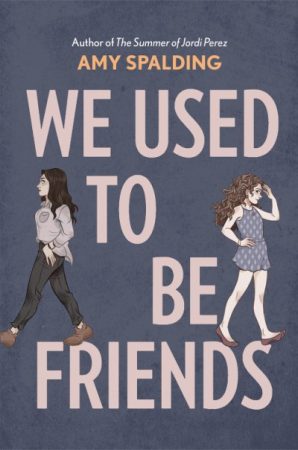 It’s tempting to just shove the pain away or to rush through the hard part. But you can’t do that when you’re coping with a breakup. Friendship breakups can still ache years after they’re over, especially if you were really close or friends for a long time. Let yourself hurt for as long as you need to. A friendship breakup is as painful, or even more painful, as a romantic breakup or losing a loved one. You wouldn’t hurry yourself through your grief in those situations, so why would you do it with a friendship breakup?

If you’re not ready to see your former friend make new memories, then the quickest thing to do is to unfollow them on social media. You don’t have to block them, unless you don’t want them knowing what you’re up to. You could also try a soft block, which is when you block them, but immediately unblock them; this forces them to unfollow you, but leaves the option open for you both to see each other’s profiles. If you feel ready to reconnect later on a more surface level, you can always refollow them. There’s a reason we all talk about having Facebook friends we haven’t seen in years – you can have those surface level social media relationships, but it’s difficult to do when you’re hurting.

Don’t Turn to Your Mutual Friends

It’s tempting to rant to all of your friends when you’re angry. But when you have mutual friends, if you turn to them and rant about all the ways your ex-friend did you wrong, you’re putting your mutual friends in a really, really awkward position. Do they defend the former friend that they’re still on good terms with? Do they tell them what you’re saying? Do they just nod and agree with you and process on their own later? As much as you may be hurting, try to avoid putting your mutual friends in that situation.  If your mutual friends ask about what happened, tell them, but don’t keep harping on it. Try to turn to your friends who don’t know or aren’t friends with your former friend; rant your heart out to those friends. And if you don’t have those other friends to turn to, write out how you’re feeling in a journal or a Google doc, then focus on making new friends.

Avoid Overthinking – But Remember This Isn’t a One Way Street

Everyone’s the hero in their own story. In your former friend’s eyes, you did something wrong too. Maybe it was something that you do need to work on, but maybe it was something that was misinterpreted or just hit in a wrong way – sometimes it’s a matter of your views on a subject not lining up, and communication breaks down. While you shouldn’t replay every single aspect of your friendship for what went wrong over and over again, it’s always good to reflect and see if there was something you did that you should avoid doing in the future – but wait until you feel up to it or you’ll just start beating yourself up and you don’t need that.

Do Something For Yourself

Self care is always important, but it’s especially so if you’re struggling emotionally. So take some time – or some of your budget – and dedicate it to doing things that made you happy. Consider picking up a new hobby, like playing a sport, coloring, drawing, playing video games, photography. Or turn to the ways we think about self care now; get a massage, do a face mask, have your nails done. If shopping makes you happy and is financially doable, go on a shopping spree. Marathon a TV show, cuddle with some animals (your local shelter probably could use some volunteers), listen to songs that make your cry and others that pump you up, do some volunteer work, eat lots of your favorite food. Either do something you know makes you happy or try something new and see if that makes you happy. Keep trying until you find it.

In a perfect world, your friends and your family will be there to lift you up, to validate your feelings, to help you cope with a friendship breakup. But sometimes that’s not an option. Maybe you’re not close to your family or all of your friends are mutual friends with your former friend or whatever the circumstances are. If you don’t already have that network in place and you’re struggling to build that network and make new friends and you’re really, really struggling, then don’t be afraid to seek help. Find a therapist if you can – there are some digital options now if you can’t find anyone locally. A therapist will always be in your corner and can act as an outsider, maybe shedding some new light on what went wrong with your friendship. Otherwise, just work on building new or existing friendships.

Remember The Worst is Temporary

Yes, losing a friendship will probably always hurt. And yes it could hurt for a long time. But the thing about pain is that it fades. It may not fade for a long time, but it will fade. Someday, you’ll be able to look back on the happy memories you have with your former friend and actually enjoy them. You will move on. You will find closure, whether you and your former friend every talk again or not. You can see them and it may be awkward at times, but you can both be polite. You can start to want the best for them. You may even consider rekindling your friendship – but do it very slowly and cautiously while making sure you’re both ready for that. You’ll make new friends and new memories. They’ll always be a part of your story, but they won’t always be your antagonist – someday, they’ll just be a side character.

Tags: Amy Spalding, we used to be friends
« Everything You Need to Know About Elizabeth Báthory
Listen to Rachael Allen’s Ultimate Summer Playlist »
We have updated our Privacy Policy, effective May 25, 2018, to clarify how we collect and process your personal data. By continuing to use this website, you acknowledge that you have read and agree to the updated Privacy Policy. Read More Accept