Take a peek at BLOOD COUNTESS

She was mesmerizing, brilliant, royal. Murder was in her blood. 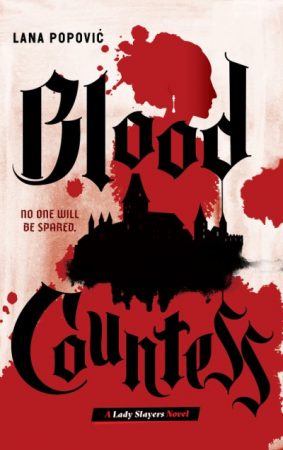 Listen up, horror fans! There’s a new historical fiction series about real murderesses from various eras. And the first one is coming out later this month.

Lana Popovic’s Blood Countess is based on one of the most vicious female serial killers in all recorded history. Yes, the Countess Elizabeth Báthory, the infamous 17th-century murderer and real-life inspiration for Countess Dracula.

In 17th century Hungary, Anna Darvulia has just begun working as a scullery maid for the young and glamorous Countess Elizabeth Báthory. When Elizabeth takes a liking to Anna, she’s vaulted to the dream role of chambermaid, a far cry from the filthy servants’ quarters below. She receives wages generous enough to provide for her family, and the Countess begins to groom Anna as her friend and confidante.

It’s not long before Anna falls completely under the Countess’s spell—and the Countess takes full advantage. Isolated from her former friends, family, and fiancé, Anna realizes she’s not a friend but a prisoner of the increasingly cruel Elizabeth.

Then come the murders, and Anna knows it’s only a matter of time before the Blood Countess turns on her, too.

Entwining meditations on female power and the nature of evil, Blood Countess provides an exploration of female psychology, and (bonus!) a twisted LGBTQ+ romance.

Intrigued? Read the first chapter, below!