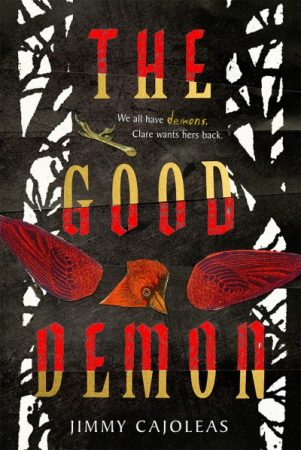 Because the only other thing you need next to a YA mystery about one girl’s exorcism, and her desperate quest to reunite with her demon, is an equally-chilling soundtrack to go along with it.

Lucky for us, The Good Demon author Jimmy Cajoleas opened up his Spotify to give us a listen. Check it out . . . if you dare!

“Bela Lugosi’s Dead” – Bauhaus
Most of the music Clare listens to comes from her dad’s old record collection she found in the attic, and Bauhaus is the first band mentioned. Maybe it’s an obvious pick, but this song totally rules, and—seeing as how Clare is a massive horror movie fan—there’s no way she wouldn’t love it. Plus, it’s long and creepy and catchy, so the perfect mood-setter for the book.

“Under the Big Black Sun” – X
This is my favorite X song, by far. Exene Cervenka sounds absolutely giddy detailing a doomed relationship. This song has it all—betrayal, religion, sex—set to this thrilling, bouncy rock song that the band absolutely rips through. Supposedly it’s also a tribute to the book Good Morning, Midnight (itself a nod to a most excellent Emily Dickinson poem) by one of my favorite writers, Jean Rhys, which just makes me love it even more.

“Happy House” – Siouxsie and the Banshees
Another song from Clare’s dad’s collection, “Happy House” is a spooky, haunting tune, with Siouxsie at her darkest and most subversive. Everything about this song—the lyrics, the synths, the vibe—are pretty much perfect. Definitely a Clare favorite.

“The Itchy Glowbo Blow” – Cocteau Twins
Clare plays the Cocteau Twins for Roy when they’re out drinking in the woods behind Clare’s house. Roy says that Elizabeth Fraser’s voice reminds him of the women having fits of glossolalia at his dad’s church. There’s something secret and holy and mystifying about the Cocteau Twins. It’s Elizabeth Fraser’s vocals, sure, but it’s also Robin Guthrie’s guitars, the way they just become this giant ocean of sound, like the music is so thick you can swim in it. One of my favorite bands ever.

“Cloudbusting” – Kate Bush
I love Kate Bush so much. I love every single one of her records. They’ve been with me through everything. Picking a favorite Kate Bush song is an insane thing to even try to do. They’re all so wonderful. I’m going with “Cloudbusting,” because I figure that’s the one Clare’s listening to at towards the end of the book. Optimism is a really hard thing for me, like hoping for and expecting good things to come is some impossibly brave, vulnerable thing. To me, Kate Bush is one of the bravest artists of all time.

“King Ink” – The Birthday Party
Nick Cave is so great I can hardly stand it, and his early work with the Birthday Party is so ferocious and strange and terrifying to me. I always listen to music when I write, and I tend to pick songs that set the exact perfect mood for each particular scene. This is such a snarling, lumbering beast of a song, and it was perfect for soundtracking the One Wish Man’s final scene. I think I listened to at least one record involving Nick Cave every day I spent writing this book.

“Attitude” – Bad Brains
Another one from Clare’s dad’s collection. Any time I get down, I throw on the Bad Brains. They’re one of my favorite punk bands of all time. I’ll never forget the first time I heard them, when I bought their self-titled record from Bebop Music in Jackson, Mississippi, because I read that Mike D from the Beastie Boy’s loved this band. I listened to it once and made my own Bad Brains shirt by scribbling on a white tee with a Sharpee. I still have that shirt in my closet back home.

“Dead Moon Night” – Dead Moon
Clare’s wearing a Dead Moon shirt at the beginning of the book, when she first meets Roy. I’ve always loved Dead Moon, their music as well as the mythology surrounding it. Fred and Toody Cole are maybe my favorite couple in music history, and along with drummer Andrew Loomis, they made some of the best music of an era. Also they have the coolest logo of all time.

“Turn Out the Lights” – Julien Baker
Julien Baker is my favorite new artist currently making music. I love every single she’s ever released. I mean, if you have a chance to see Julien Baker live and you skip it, you’re out of your mind. I love this song so much, and the lines “When I turn out the lights/There’s no one left/Between myself and me” just wreck me. It’s a song about confronting yourself and your own darkness, and about loneliness as well. If I could travel into my own book world and give Clare any music to help her through the hard times, I would give her this song.

“Why Do You Love Me?” – Cocteau Twins and Harold Budd
Clare and Roy listen to this record (the full album is called The Moon and the Melodies) at a pivotal moment in the book. I love the Cocteau Twins work with Harold Budd so much, and this collaboration might be my favorite thing anyone involved here ever put out. Nothing creates an atmosphere quite like this record. I think I listened to it all the way through at least once every day I worked on The Good Demon. It’s one of my very favorite things in the world.

“A Letter to Elise” – The Cure
Though this particular song might have been released a little too late to show up in Clare’s dad’s record collection, it’s one of my very favorite Cure songs, full of that slow weird longing that only Robert Smith does so well. When I first sold the manuscript of The Good Demon, my brilliant editor Maggie Lehrman sent me a Youtube mix of songs from the book, and this was the Cure tune she picked. As always, she has excellent taste!

“Fear & Force” – Vagabon
Aw man, this song is just so great. I listened to this song on repeat during the last stages of the editing process, and I kind of think it kept me sane. A beautiful tune about longing and regret, about missing someone important to you. I live a long way away from most of my friends now, and we lose touch as we get older and people start getting married and having babies. This song makes me miss all of them, in the best way.

“Hyperballad” – Bjork
Bjork is the greatest. I’m serious. Her voice might be my favorite musical instrument in the world. It’s a real earthly treasure, like the way a mountain or a giant waterfall is a treasure. You listen to it like the way you look at stars—with awe. There are a million Bjork songs I could have picked, but there’s something so true and powerful about the image of a person chucking personal belongings off a cliff in order to make a relationship work. It perfectly articulates this very specific feeling, and then the song bursts open and explodes. Jeez. Somebody should probably write a whole book on this song.

“Just Like Honey” – The Jesus and Mary Chain
Clare’s mom and dad had their first dance at their wedding to “Just Like Honey.” It’s a talisman kind of song for Clare, one that holds incredible power for her, one that can conjure the best parts of her father, despite all of his problems. It’s also a perfect song, and it will be a perfect song forever. That’s one of the things that makes me happiest about life. There’s so much beautiful stuff out there—books and music and movies and art—and every time you find something wonderful, you get to keep it with you, and in some weird way, it becomes a part of you, a piece of who you are. It’s a mystical process, to be sure, but I am so very thankful for it, what a beautiful flimsy thing a human made can do to your heart.

“Can’t Hardly Wait (Tim Version)” – The Replacements
This is my favorite song of all time, so I had to put it on here. I love the official album cut from Pleased to Meet Me, but there’s something about the version from the Tim sessions that is so much more visceral and powerful and absolutely screamingly alive. Maybe it’s Bob Stinson’s lead guitar work, or maybe it’s the wild rasp of Paul Westerberg’s holler, or maybe it’s all of it altogether. Please someone play this song at my funeral.

“Scorpio Rising” – Soccer Mommy
What a dream of a song. I love this band so much, and “Scorpio Rising” is maybe their finest achievement. This song is a bit too new for it to have influenced the writing of The Good Demon, but I had to include it anyway. Every year—even the good ones—carries its own share of difficulties, and lately I’ve found myself turning to “Scorpio Rising” lately when things get tough and I need a break. I don’t know what it is about this song, or any song really, that makes it so good. But there’s something special here, some particular kind of magic, and I’m very grateful for it.

“REALiTi (demo)” – Grimes
Clare doesn’t often listen to new music in The Good Demon, but she does mention loving Grimes. And how could she not? I was midway through the first draft of the book when Grimes released the demo version of “REALiTi”, and I listened to it constantly as I fought my way to the end of the book. The album version of this song is pretty spectacular too, but there’s something about the demo that feels rawer and more powerful. Or maybe it’s just the one I heard first, so I like it better. Regardless, no matter the version, this song rules.

“The Flower of Carnage” – Meiko Kaji
This is the theme song for the film Lady Snowblood, sung by the lead actress who played her, Meiko Kaji. Lady Snowblood is one of Clare’s favorite movies, and she has a poster of it hanging on her bedroom wall. Meiko Kaji is incredible. She starred in so many amazing movies, including a particular favorite of mine, Blind Woman’s Curse, one the strangest and most incredible movies I’ve ever seen. This song has a swagger to it, a kind of vulnerable bravery, as romantic and doomed as any gunslinger riding off into the sunset. Quentin Tarantino famously used it in Kill Bill Pt. 1, which he should have, since that movie borrows so heavily from Meiko Kaji’s work.

Listen to the full playlist below!