Pucker Up!: 5 of Our Favorite YA Romances for International Kissing Day

Today is International Kissing Day, a holiday established in 2006 to celebrate the importance of kissing and romance. While kissing and romance aren’t for everyone, their significance in society can’t be ignored. Plus, we’re suckers for a good love story. So we thought today would be a perfect opportunity to reflect on some of our favorite romances in YA!

One iconic book-next-door romance comes from Lola and the Boy Next Door – it’s kind of in the title. Lola and Cricket grew up together, but Cricket and his sister moved away. Now they’re back and Lola’s got a boyfriend and isn’t interested, except she kind of is. Watching these two get to know each other again as teens is so rewarding, as a reader, since it seemed like they were destined to be together as kids before things fell apart. This is another one that explores the different ways people come together and it’s definitely an iconic YA relationship.

Spencer and Hope are another book-next-door duo we can’t stop thinking about – which is fitting since their love story takes place over five years. Spencer begins crushing on Hope as soon as he meets her in the summer before seventh grade. A Taxonomy of Love explores their relationship and the way it evolves over the years – friendships, heart breaks, tragedies, feuds. The novel uses their relationship to really look at how complicated things can get. As a pretty famous writer once said, “[t]he course of true love never did run smooth.”

Wintersong released early in 2017 and readers were instantly drawn in to the story of Liesl and the Goblin King. Liesl’s always been fascinated by the stories of the Goblin King, letting them inspire her music and fill her dreams while she spends her life helping run her family’s inn. Until her sister disappears to the Underground and Liesl has to face the Goblin King to get her sister back. From there, the two develop a wary relationship, which grows over time into one full of devotion and support. While he might be a powerful being who runs the Underground, all he wants is to support Liesl however he can, and it’s satisfying to see him bow to her desires at every turn. Maybe not the healthiest relationship, but it’s still pretty iconic. 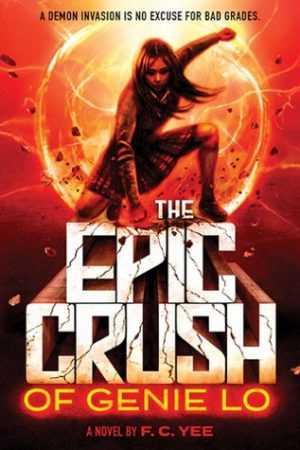 Most people would say you shouldn’t get in a relationship with your co-workers, but things are a little different when you and your co-worker are powerful beings most people think are just from myths and you also have to fight demons. Such is the case for Genie Lo and Quentin, who’s actually Sun Wukong, in The Epic Crush of Genie Lo. Genie’s just trying to get through high school when Quentin arrives at school acting weirdly formal – and there are some demons hanging around too. With Quentin’s help, Genie has to get in touch with her powers and develop them so she can help him fight demons and when you’re forced to spend that much time with someone…things happen. Their relationship is full of banter and snark and chemistry from the beginning, so it’s very satisfying to see it come together.

While every relationship from the Six of Crows duology is beloved and deserving of attention, Kaz and Inej have a special dynamic. Both of them are emotionally scarred, having grown up in rough conditions, and now just trying to stay alive. Neither expresses their feelings well, but they are undoubtedly to the group, but especially each other. Kaz is cold-hearted and cruel and selfish, so his tender moments with Inej feel especially swoony, even if under normal circumstances it wouldn’t seem that romantic. Because these two are so prickly, the little things between them really shine.

While there are so many iconic romances in YA, these are just a few favorites. Which ones do you love most?