2018 is here and we’re kind of blown away by that! New Year’s always come with so much promise and hope. If you’re a book lover, a new year also means a whole new crop of books. Highly anticipated sequels, debut authors to try out, new books from old favorites – the anticipation of finding new favorite books is in the air today. 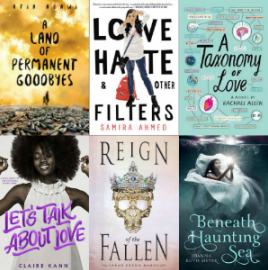 A Land of Permanent Goodbyes by Atia Abawi
Love, Hate, and Other Filters by Samira Ahmed
A Taxonomy of Love by Rachael Allen
Shadowsong by S. Jae-Jones
Let’s Talk About Love by Claire Kann
Reign of the Fallen by Sarah Glenn Marsh
Beneath the Haunting Sea by Joanna Ruth Meyer
Before I Let Go by Marieke Nijkamp
You’ll Miss Me When I’m Gone by Rachel Lynn Solomon 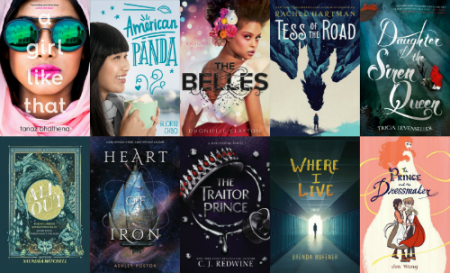 A Girl Like That by Tanaz Bhathena
American Panda by Gloria Chao
The Belles by Dhonielle Clayton
Tess of the Road by Rachel Hartman
Daughter of the Siren Queen by Tricia Levenseller
All Out edited by Saundra Mitchell
Heart of Iron by Ashley Poston
The Traitor Prince by C.J. Redwine
Where I Live by Brenda Rufener
The Prince and the Dressmaker by Jen Wang 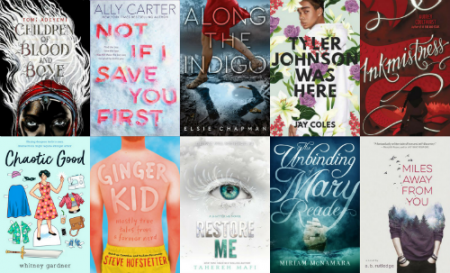 Children of Blood and Bone by Tomi Adeyemi
Not If I Save You First by Ally Carter
Along the Indigo by Elise Chapman
Tyler Johnson Was Here by Jay Coles
Inkmistress by Audrey Coulthurst
Chaotic Good by Whitney Gardner
Ginger Kid by Steve Hofstetter
Restore Me by Tahereh Mafi
The Unbinding of Mary Reade by Miriam McNamara
Miles Away From You by A.B. Rutledge 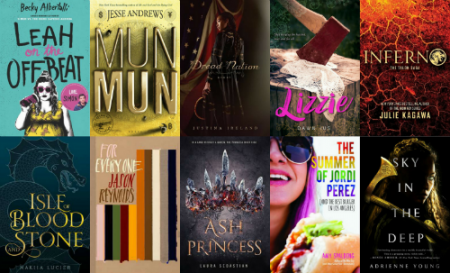 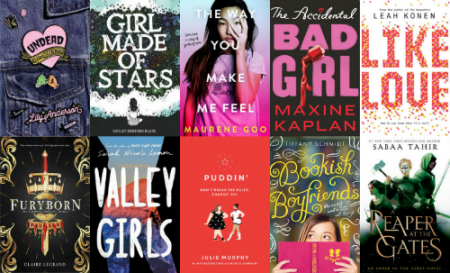 My Plain Jane by Brodi Ashton, Cynthia Hand, and Jodi Meadows
Smoke in the Sun by Renee Ahdieh
The Bird and the Blade by Megan Bannen
A Thousand Beginnings and Endings edited by Elsie Chapman and Ellen Oh
Fat Girl on a Plane by Kelly deVos
Save the Date by Morgan Matson
From Twinkle, With Love by Sandhya Menon
Final Draft by Riley Redgate
Not the Girls You’re Looking For by Aminah Mae Safi
Your Destination is On the Left by Lauren Spieller
Whisper of the Tide by Sarah Tolcser