Rounding Out 2017 with December’s YA Releases

Somehow, 2017 is almost over – seriously how can that be? Fortunately, the year is ending on a high note with some more excellent YA titles for you to enjoy in the lead up to the holidays or in the downtime that is the very end of the year. 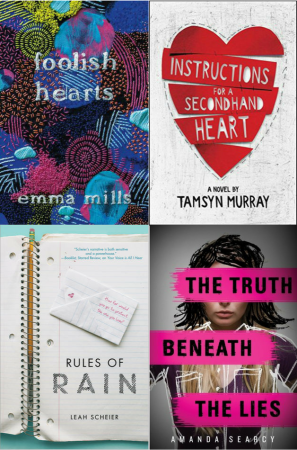 Foolish Hearts by Emma Mills (December 5) – During the last party of the summer, Claudia overhears a conversation she wasn’t supposed to. Now on the wrong side of one of the meanest girls in school, Claudia doesn’t know what to expect when the two are paired up to write a paper—let alone when they’re both forced to try out for the school production of A Midsummer Night’s Dream. But mandatory participation has its upsides—namely, an unexpected friendship, a boy band obsession, and a guy with the best dimpled smile Claudia’s ever seen. As Claudia’s world starts to expand, she finds that maybe there are some things worth sticking her neck out for.

Instructions for a Secondhand Heart by Tasmyn Murray (December 5) – Jonny knows better than anyone that life is full of cruel ironies. He’s spent every day in a hospital hooked up to machines to keep his heart ticking. Then when a donor match is found for Jonny’s heart, that turns out to be the cruelest irony of all. Because for Jonny’s life to finally start, someone else’s had to end. That someone turns out to be Neve’s twin brother, Leo. When Leo was alive, all Neve wanted was for him (and all his glorious, overshadowing perfection) to leave. Now that Leo’s actually gone forever, Neve has no idea how to move forward. Then Jonny walks into her life looking for answers, her brother’s heart beating in his chest, and everything starts to change. Together, Neve and Jonny will have to face the future, no matter how frightening it is, while also learning to heal their hearts, no matter how much it hurts.

Rules of Rain by Leah Scheier (December 5) – Rain has taken care of Ethan all of her life. Before she even knew what autism meant, she’s been her twin brother’s connection to the hostile world around him. She’s always prepared—when her father abandons them, when her mother gets sick, when Ethan is tortured by bullies from school—Rain is the reliable, stable one holding them all together. She’s both cautious carer and mad chef, preparing customized meals for her family and posting crazy recipes on her cooking blog. Each day with Ethan is unvarying and predictable, and she’s sure that nothing will ever change—until one night when her world is turned upside down by a mistake she can’t take back. As her new romance with her long-time crush and her carefully constructed life begins to unravel, she discovers that the fragile brother whom she’s always protected has grown into a young man who no longer needs her. And now, for the first time, she finds that she needs him.

The Truth Beneath the Lies by Amanda Searcy (December 12) – All Kayla Asher wants to do is run. Run from the government housing complex she calls home. Run from her unstable mother. Run from a desperate job at No Limit Foods. Run to a better, cleaner, safer life. Every day is one day closer to leaving. All Betsy Hopewell wants to do is survive. Survive the burner phone hidden under her bed. Survive her new rules. Survive a new school with new classmates. Survive being watched. Every minute grants her another moment of life. But when fate brings Kayla and Betsy together, only one girl will live.

Here, There, Everywhere by Julia Durango and Tyler Terrones (December 19) – Zeus would rather be anywhere than here—Buffalo Falls—the tiny town his family moved to at the end of the school year. Having left all his friends back in Chicago and with nothing to look forward to except helping out at his mother’s café and biking around town with his weird little brother, Zeus is pretty sure this is destined to be the worst summer of his life. But then he meets Rose—funny, beautiful, smart, and an incredible musician. Zeus can hardly believe that someone like her exists, let alone seems interested in being with him. However, while Zeus is counting down the minutes until he can see her next, Rose is counting down the days until she finds out whether she will be able to leave their small town to pursue her dreams. As the afternoons spent going on local adventures pass into nights discussing their deepest hopes, Zeus knows that he doesn’t have long to convince Rose that what they have is more than a summer fling…if only he’s brave enough to seize the chance.

Shadow Girl by Liana Liu (December 19) – The house on Arrow Island is full of mystery. Yet when Mei arrives, she can’t help feeling relieved. She’s happy to spend the summer in an actual mansion tutoring a rich man’s daughter if it means a break from her normal life—her needy mother, her delinquent brother, their tiny apartment in the city. And Ella Morison seems like an easy charge, sweet and well behaved. What Mei doesn’t know is that something is very wrong in the Morison household. Though she tries to focus on her duties, Mei becomes increasingly distracted by the family’s problems and her own complicated feelings for Ella’s brother, Henry. But most disturbing of all are the unexplained noises she hears at night—the howling and thumping and cries. Mei is a sensible girl. She isn’t superstitious; she doesn’t believe in ghosts. Yet she can’t shake her fear that there is danger lurking in the shadows of this beautiful house, a darkness that could destroy the family inside and out… and Mei along with them.

Three Sides of a Heart by (December 19) edited by Natalie C. Parker – A teen girl who offers kissing lessons. Zombies in the Civil War South. The girl next door, the boy who loves her, and the girl who loves them both. Vampires at a boarding school. Three teens fighting monsters in an abandoned video rental store. Literally the last three people on the planet.  What do all these stories have in common? The love triangle. You may think you know the love triangle, but you’ve never seen love triangles like these.

Prince in Disguise by Stephanie Kate Strohm (December 19) – Life is real enough for Dylan—especially as the  younger sister of Dusty, former Miss Mississippi and the most perfect, popular girl in Tupelo. But when Dusty wins the hand of the handsome Scottish laird-to-be Ronan on the TRC television network’s crown jewel, Prince in Disguise, Dylan has to face a different kind of reality: reality TV. As the camera crew whisks them off to Scotland to film the lead-up to the wedding, camera-shy Dylan is front and center as Dusty’s maid of honor. The producers are full of surprises—including old family secrets, long-lost relatives, and a hostile future mother-in-law who thinks Dusty and Dylan’s family isn’t good enough for her only son. At least there’s Jamie, an adorably bookish groomsman who might just be the perfect antidote to all Dylan’s stress . . . if she just can keep TRC from turning her into the next reality show sensation.

Bad Call by Stephen Wallenfels (December 19) – During a late-night poker game, tennis teammates Colin, Ceo, Grahame, and Rhody make a pact to go on a camping trip in Yosemite National Park. And poker vows can’t be broken. So the first sign that they should ditch the plan is when Rhody backs out. The next is when Ceo replaces him with Ellie, a girl Grahame and Colin have never even heard of. And then there’s the forest fire at their intended campsite. But instead of bailing, they decide to take the treacherous Snow Creek Falls Trail to the top of Yosemite Valley. From there, the bad decisions really pile up. A freak storm is threatening snow, their Craigslist tent is a piece of junk, and Grahame is pretty sure there’s a bear on the prowl. On top of that, the guys have some serious baggage (and that’s not including the ridiculously heavy ax that Grahame insisted on packing) and Ellie can’t figure out what their deal is. And then one of them doesn’t make it back to the tent.

The Love Letters of Abelard and Lily by Laura Creedle (December 26) – When Lily Michaels-Ryan ditches her ADHD meds and lands in detention with Abelard, who has Asperger’s, she’s intrigued—Abelard seems thirty seconds behind, while she feels thirty seconds ahead. It doesn’t hurt that he’s brilliant and beautiful. When Abelard posts a quote from The Letters of Abelard and Heloise online, their mutual affinity for ancient love letters connects them. The two fall for each other. Hard. But is it enough to bridge their differences in person?

Before Now by Norah Olson (December 26) – The odds were against them, but somehow aspiring astronomer Atty and her troubled boyfriend, Cole, managed to escape their old lives in the rough neighborhoods of Minneapolis and the judgmental eyes of their parents, who couldn’t see that Atty and Cole were meant to be. But they don’t get away clean. Eventually the mistakes and betrayals from their pasts catch up to them. Atty is lying about why Cole is being hounded by the cops and Cole won’t go quietly to jail—or anywhere without Atty. Then the unthinkable becomes reality and the future is instantly unwritten. Through Atty’s journal, all the intimate details of her tragic romance with Cole unfold from finish to start, including the mystery of what brought them together—and tore them apart.

Love, Life, and the List by Kasie West (December 26) – Seventeen-year-old Abby Turner’s summer isn’t going the way she’d planned. She has a not-so-secret but definitely unrequited crush on her best friend, Cooper. She hasn’t been able to manage her mother’s growing issues with anxiety. And now she’s been rejected from an art show because her work “has no heart.” So when she gets another opportunity to show her paintings Abby isn’t going to take any chances. Which is where the list comes in. Abby gives herself one month to do ten things, ranging from face a fear (#3) to learn a stranger’s story (#5) to fall in love (#8). She knows that if she can complete the list she’ll become the kind of artist she’s always dreamed of being. But as the deadline approaches, Abby realizes that getting through the list isn’t as straightforward as it seems… and that maybe—just maybe—she can’t change her art if she isn’t first willing to change herself.

Which books are you looking forward to this December? Tweet us at @PiqueBeyond.

« Quote of the Week: THE ROMANTICS
Top YA Tropes We Still Enjoy »