A funny, sexy debut YA about a good girl who learns to be “bad.” That’s how we’d describe Maxine Kaplan’s The Accidental Bad Girl (May 2018).

After getting caught hooking up with her best friend’s ex on the last day of junior year, Kendall starts senior year friendless and ostracized. She plans to keep her head down until she graduates. But after discovering her online identity has been hacked and she’s being framed for stealing from a dealer, Kendall is drawn into a tenuous partnership with the mastermind of a drug ring lurking in the shadows of her Brooklyn private school. If she wants to repair her tattered reputation and save her neck, she’ll have to decide who she really is—and own it. The longer she plays the role of “bad girl,” the more she becomes her new reputation. Friends and enemies, detectives and drug dealers—no one is who they appear to be. Least of all Kendall.

Long story short, if you like twisty, snappy mysteries about girls who refuse to be put into little boxes, or are even looking to fill that Pretty Little Liars void, The Accidental Bad Girl needs to be tops on your TBR list this spring.

We’ve been lucky enough to read—and re-read—the galley since it landed on our shelf earlier this season, and we were treated to another delight: the cover just got a new badass look thanks to ABRAMS’s Senior Designer, Siobhán Gallagher, and illustrator Catherine Casalino.

Check out the new cover for Maxine’s debut! 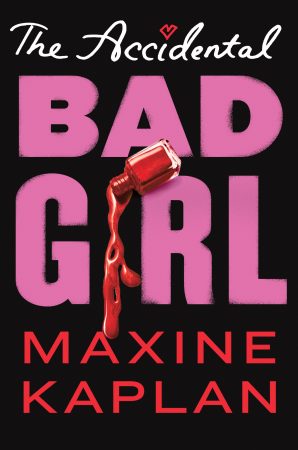 “For me, this cover perfectly represents Kendall’s journey through The Accidental Bad Girl, as she becomes an undeniable badass, who never lets herself be cowed by or made ashamed of her gender,” Maxine says of the revamped design. “Being a ‘Bad Girl’ can be a powerful state of mind, and I love how this cover represents that.”

The Accidental Bad Girl lands on shelves May 15, 2018 and you can pre-order your copy here.

What do *you* think of the Accidental Bad Girl’s new cover? Tweet us your thoughts at @PiqueBeyond.