Give Thanks for Books

No Thanksgiving is complete without saying what you’re thankful for. Here at Pique, books are, of course, at the top of our list. In celebration of eating all that turkey, we are counting down some of the classics that remind us how powerful a book can be—Every. Single. Year.

The Sorcerer’s Stone, published in 1997 and aged for middle grade readers, introduces the young orphaned Harry, who has an infinity for magic. As the series progresses and Harry grows older, readers will find darker themes of morality, depression, and fascism, making the series consumable not just for YA readers, but adults as well. This series is one that will withstand the test of time, and one that every reader—adults included—should be thankful for.

The Hunger Games by Suzanne Collins

With a bleak dystopian future, Hunger Games is one of those YA series that grabs you from its concept and keeps you engaged thanks to its flawed heroine. Katniss Everdeen volunteers to take the place of her younger sister in the Hunger Games, a cruel game where one boy and one girl from each district must fight each other until only one survives. Intense action-packed scenes, a disturbing world, and love thrown into the mix, this is one series YA readers won’t want to miss.

The Perks of Being a Wallflower by Stephen Chbosky

Charlie is a young freshman starting his life in high school, when he meets Sam and Patrick, who quickly become his best friends. He begins to cope with loss and experience life through actions rather than words.  The Perks of Being a Wallflower is up front with topics like sex, drugs, love, and teenage angst, but you’ll easily fall in love with Charlie and his heartfelt, realistic story told in letter format. 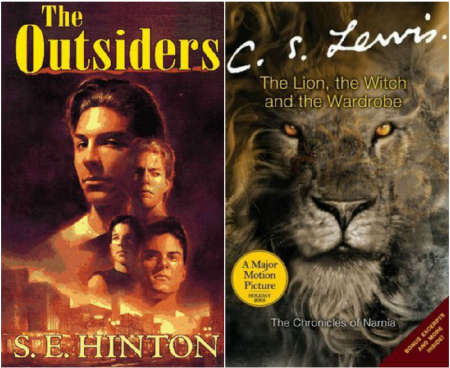 The Outsiders by S.E. Hinton

The Outsiders, a YA classic, is about a gang war between the greasers (poor kids) and the socs (the rich kids). Young greaser Ponyboy’s world is shaken when his best friend, Johnny, kills a soc. The Outsiders, at its core, is a book all about being teenagers, written by a teen for teens. Filled with topics like drugs, alcohol, and violence, it keeps you engaged from start to finish.

The Lion, the Witch, and the Wardrobe series by C.S. Lewis

Young Lucy discovers the mysterious wardrobe, and when she goes in, she’s transported into the magical world of Narnia. Her brother and sister, Peter and Susan, soon follow her, leading them on unforgettable adventures. With a looming war, an evil witch, and a helpful talking lion, C.S. Lewis creates a great fantasy escape.

The Catcher in the Rye by J.D. Salinger

Holden Caulfield is a confused, cynical teen, who has been kicked out of another prestigious school. Though he’s intelligent, he lacks motivation, feeling bored and neglected by his wealthy family. With a privileged sixteen-year-old as the narrator, The Catcher in the Rye may sound unappealing, yet underneath the surface, Holden is also compassionate and deeply emotional. YA readers will enjoy peeling back the layers of this teenage angst coming-of-age story.

The Fault in Our Stars by John Green

If you are a YA fan, you’ve heard of John Green. The Fault in Our Stars is about a young terminally ill girl named Hazel, and the boy, Augustus Waters, who falls for her during their sessions at Cancer Kid Support Group. Green gives us a story filled with teen love, angst, and heartbreaking moments. Bold, thrilling, and tragically gripping.

To Kill a Mockingbird by Harper Lee

Set in the 1930s during the Great Depression, To Kill a Mockingbird centers around Scout, her brother, Jem, and their father, Atticus. Scout and Jem are perfectly happy acting out stories and snooping around the Radley House. But when Atticus takes on the case of a black man accused of raping a white woman, Scout and Jem are confronted with the injustices and prejudices of the world. A compassionate, eye-opening, and deeply moving tale, To Kill a Mockingbird will stay with you. Trust us. 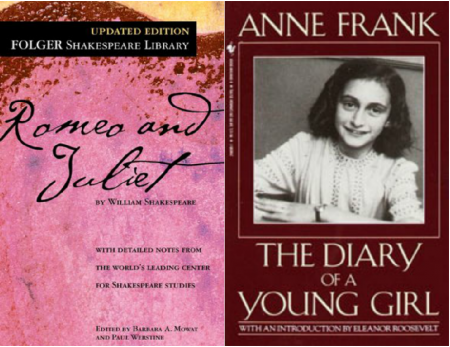 Technically a play, Romeo and Juliet written by Shakespeare in the late sixteenth century, is proof that teenage love can withstand the test of time. Masterfully written with heart-wrenching scenes, the play centers around a feud between rival houses, where two youths fall in love with their hated enemy. Shakespeare creates a violent, unforgiving world riddled with themes of true love versus infatuation, the urgency of youth, and betrayal and vengeance. With beautiful, tragic protagonists, anyone who picks it up will fall over and over for these star-crossed lovers.

Diary of a Young Girl by Anne Frank

In 1942, the Nazis occupied Holland, and young Anne Frank and her Jewish family went into hiding. They lived in the “Secret Annexe” of an old office building, cut off from the outside world and faced with the ever-present danger of being discovered. Anne records her daily life in her diary, offering a vivid and invaluable account on bravery and frailty. Readers will share her hopes and dreams, and in the end, wish they could rewrite history.

Which books will you forever be grateful for? Tweet us @PiqueBeyond and let us know your top picks!

« Sporty YA Books for Every Occasion
Historical YA: Reading Through from the 1500s through the 1800s »