Historical YA: Reading History One Decade at a Time

My journey with historical fiction started when I found historical fantasy – I really just wanted books about magic – but it opened up a whole world of history I had never thought to explore. Unlike the boring textbooks, these stories were vivid and full of life, exploring times I’d never really thought about. It’s fascinating to see things happening all over the world in the same decade and get a fuller picture of what the world looked like. Historical fiction has been important to me since then, so today we’re sharing some YA books set in historical eras! We broke it down by decade as best as we could, but it can be a bit hard to find an exact. This post focuses on BC times through the 15th century, but we’ll have more coming.

Song of the Sparrow by Lisa Ann Sandell 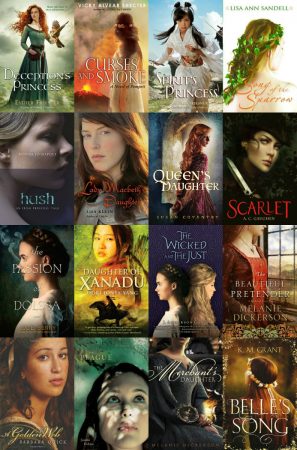 The Queen’s Daughter by Susan Coventry
Scarlet by A.C. Gaughen

The Passion of Dolssa by Julie Berry

The Wicked and the Just by J. Anderson Coats

The Beautiful Pretender by Melanie Dickerson

A Golden Web by Barbara Quick

The Plague by Joanne Dahme

The Merchant’s Daughter by Melanie Dickerson

The Golden Braid by Melanie Dickerson

« Finding Bookish Merch: Traveling Through the Middle of America
Can You Match the First Line to the Book? »