School is starting again, the temperatures are getting a little bit cooler, and sweaters are starting to make their way back into stores. Fall is almost here. No matter what your feelings are about that, we can all appreciate having more new books to read and this upcoming season is loaded with them!

For Book Lovers Day, we’re celebrating by telling you about some of the September titles we can’t wait to read. 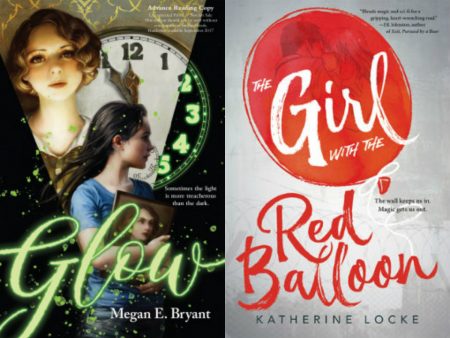 Glow by Megan E. Bryant (September 1) – When thrift-store aficionado Julie discovers a series of antique paintings with hidden glowing images that are only visible in the dark, she wants to learn more about the artist. In her search, she uncovers a century-old romance and the haunting true story of the Radium Girls, young women who used radioactive paint to make the world’s first glow-in-the-dark products—and ultimately became radioactive themselves.

The Girl with the Red Balloon by Katherine Locke (September 1) – When Ellie Baum accidentally time-travels via red balloon to 1988 East Berlin, she’s caught up in a conspiracy of history and magic. She meets members of an underground guild in East Berlin who use balloons and magic to help people escape over the Wall—but even to the balloon makers, Ellie’s time travel is a mystery. When it becomes clear that someone is using dark magic to change history, Ellie must risk everything—including her only way home—to stop the process.

Girls Made of Snow and Glass by Melissa Bashardoust (September 5) – Entwining the stories of both Lynet and Mina in the past and present, this feminist Snow White retelling traces the relationship of two young women doomed to be rivals from the start. Only one can win all, while the other must lose everything—unless both can find a way to reshape themselves and their story.

Black Bird of the Gallows by Meg Kessel (September 5) – A simple but forgotten truth: Where harbingers of death appear, the morgues will soon be full. The secrets Angie Dovage’s town holds could kill them all, but that’s only half as dangerous as falling in love with a harbinger of death.

They Both Die at the End by Adam Silvera (September 5) – On September 5, a little after midnight, Death-Cast calls Mateo Torrez and Rufus Emeterio to give them some bad news: They’re going to die today. Mateo and Rufus are total strangers, but, for different reasons, they’re both looking to make a new friend on their End Day.

She, Myself, and I by Emma Young (September 5) – Ever since Rosa’s nerve disease rendered her quadriplegic, she’s depended on her older brother to be her rock and her mirror, until a doctor chooses her for an experimental brain transplant. Rosa wakes in the body of a girl left brain dead and she can’t help but wonder who Sylvia was, but will she lose herself in the process? 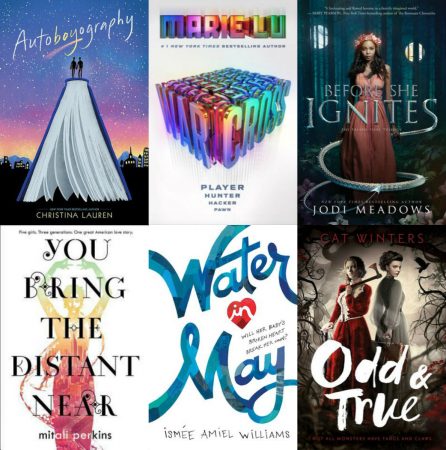 Autoboyography by Christina Lauren (September 12) – Fangirl meets Simon vs. the Homo Sapiens Agenda in this funny and poignant coming-of-age novel from New York Times bestselling author Christina Lauren about two boys who fall in love in a writing class—one from a progressive family and the other from a conservative Mormon community.

Warcross by Marie Lu (September 12) – When a game called Warcross takes the world by storm, one girl hacks her way into its dangerous depths. Convinced she’s going to be arrested, Emika is shocked when instead she gets a call from the game’s creator, the elusive young billionaire Hideo Tanaka, with an irresistible offer.

Before She Ignites by Jodi Meadows (September 12) – She’s known across the Fallen Isles not just for her beauty, but for the Mira Treaty named after her, a peace agreement which united the seven islands against their enemies on the mainland. Then Mira discovers an explosive secret that challenges everything she and the Treaty stand for. Betrayed by the very people she spent her life serving, Mira is sentenced to the Pit–the deadliest prison in the Fallen Isles.

You Bring the Distant Near by Mitali Perkins (September 12) – From a grandmother worried that her children are losing their Indian identity to a daughter wrapped up in a forbidden biracial love affair to a granddaughter social-activist fighting to preserve Bengali tigers, Perkins weaves together the threads of a family growing into an American identity.

Water in May by Ismee Williams (September 12) – Mari Pujols believes that the baby she’s carrying will finally mean she’ll have a family member who will love her deeply and won’t ever leave her. But when doctors discover a potentially fatal heart defect in the fetus, Mari faces choices she never could have imagined.

Odd and True by Cat Winters (September 12) – Trudchen grew up hearing Odette’s stories of their monster-slaying mother and a magician’s curse. But now that Tru’s older, she’s starting to wonder if her older sister’s tales were just comforting lies, especially because there’s nothing fantastic about her own life—permanently disabled and in constant pain from childhood polio. In 1909, after a two-year absence, Od reappears with a suitcase supposedly full of weapons and a promise to rescue Tru from the monsters on their way to attack her.

Jane, Unlimited by Kristin Cashore (September 19) – Jane remembers her aunt telling her: “If anyone ever invites to you to Tu Reviens, promise me that you’ll go.” With nothing but a trunkful of umbrella parts to her name, Jane ventures out to the Thrash estate, where her story takes a turn, or rather, five turns. What Jane doesn’t know is that Tu Reviens will offer her choices that can ultimately determine the course of her untethered life, but at Tu Reviens, every choice comes with a reward, or a price.

Speak Easy, Speak Love by McKelle George (September 19) – Six teenagers’ lives intertwine during one thrilling summer full of romantic misunderstandings and dangerous deals in this prohibition-era retelling of Shakespeare’s Much Ado About Nothing.

Murder, Magic, and What We Wore by Kelly Jones (September 19) – The year is 1818, the city is London, and 16-year-old Annis Whitworth has just learned that her father is dead and all his money is missing. And so, of course, she decides to become a spy.

Moxie by Jennifer Matheiu (September 19) – Vivian Carter is fed up with a school administration at her small-town Texas high school that thinks the football team can do no wrong, with sexist dress codes, hallway harassment, and gross comments from guys during class. Viv takes a page from her mother’s past and creates a feminist zine that she distributes anonymously to her classmates and soon has a girl revolution on her hands. 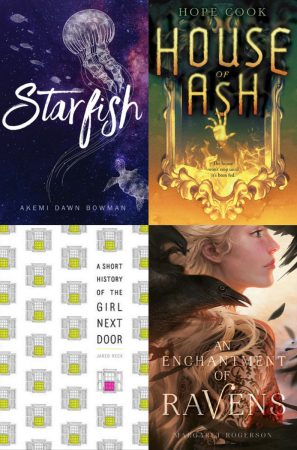 Starfish by Akemi Dawn Bowman (September 26) – With a mother who makes her feel unremarkable and a half-Japanese heritage she doesn’t quite understand, Kiko prefers to keep her head down, certain that once she makes it into her dream art school, Prism, her real life will begin. But when Kiko doesn’t get into Prism, at the same time her abusive uncle moves back in with her family, she jumps at the invitation of a childhood friend to tour art schools on the west coast.

House of Ash by Hope Cook (September 26) – When Curtis locks eyes with a steely Victorian girl in a forgotten mirror, he’s sure she’s one of the fire’s victims. If he can unravel the mystery, he can save his sanity . . . and possibly the girl who haunts his dreams. But more than 100 years in the past, the girl in the mirror is fighting to escape Gravenhearst with her sister and unravel the house’s secrets—before it devours them both.

A Short History of the Girl Next Door by Jared Reck (September 26) – Matt Wainwright can’t tell his lifelong best friend, Tabby, how he really feels about her; his promising basketball skills are being overshadowed by his attitude on the court, and the only place he feels normal is in English class, where he can express his inner thoughts in quirky poems and essays. Matt is desperately hoping that Tabby will reciprocate his feelings; but then Tabby starts dating Liam Branson, senior basketball star and all-around great guy.

An Enchantment of Ravens by Maragret Rogerson (September 26) – Isobel is a prodigy portrait artist with a dangerous set of clients: the sinister fair folk, immortal creatures who cannot bake bread, weave cloth, or put a pen to paper without crumbling to dust. But when she receives her first royal patron—Rook, the autumn prince—she makes a terrible mistake. She paints mortal sorrow in his eyes – a weakness that could cost him his life.

Tags: cat winters, Emma Young, Hope Cook, House of Ash, ismee williams, Odd and True, She Myself and I, water in may
« You Love Her, You Hate Her, You Need Her: Happy Sisters Day!
9 YA Heroines We’d Want in Our Girl Squad »