You Love Her, You Hate Her, You Need Her: Happy Sisters Day! 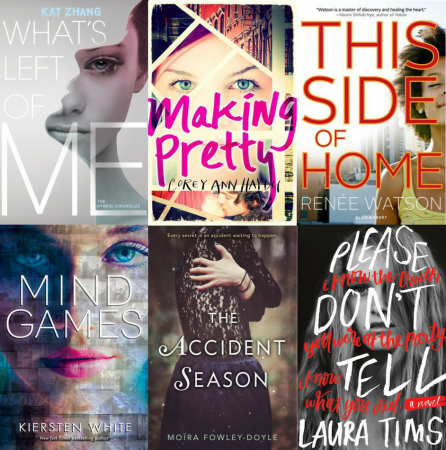 Sister relationships can be a complicated thing. They can be your best friends, your biggest enemies, or both in the same day. Sometimes sisters are really similar and sometimes they’re really different. But at the end of the day, most people have sisters they can rely on when things get rough.

YA has found all sorts of ways to look at sisterhood. Plenty of books begin with a sister dying, because authors understand how important that relationship is and what a major change that grief can cause in a teen’s life. Some books have sisters who share a body, physically demonstrating the closeness and how that can chafe. Others show sisters who are protectors, some who are friends. Adopted sisters and step-sisters are investigated too; the variety of Cinderella retellings in YA create as many different step-sister relationships as we see in movie adaptations.

With Sisters Day upon us, what better way to celebrate than to tell you about our favorite sisters in YA!

Eva and Addie from What’s Left of Me by Kat Zhang
Fia and Annie from Mind Games by Kiersten White
Gem and Dixie from Gem and Dixie by Sara Zarr
Jane, Maude, and Isabella from The Stepsister’s Tale by Tracy Barrett
Clara and Hailey from Gemini by Sonya Mukherjee
Katniss and Prim from The Hunger Games by Suzanne Collins
Scarlett and Tella from Caraval by Stephanie Garber
Molly and Cassie from The Upside of Unrequited by Becky Albertalli 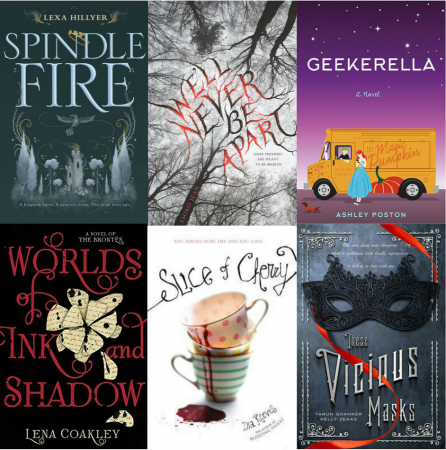 Adrienne, Vanessa, and Marie from Tell Me Something Real by Calla Devlin
Scarlett and Rosie from Sisters Red by Jackson Pearce
Chloe and Ruby from Imaginary Girls by Nova Ren Suma
Alex and Portia from The Blazing Star by Imani Josey
Charlotte, Emily, and Anne from Worlds of Ink and Shadow by Lena Coakley
Cate, Maura, and Tess from Born Wicked by Jessica Spotswood
Nick and Dara from Vanishing Girls by Lauren Oliver
Evelyn and Rose from These Vicious Masks by Tarun Shanker and Kelly Zekas
Elle, Calliope, and Chloe from Geekerella by Ashley Poston
Kit and Fancy from Slice of Cherry by Dia Reeves
Nikki and Maya from This Side of Home by Renee Watson
Piper and Merli from Piper Perish by Kayla Cagan
Cath and Wren from Fangirl by Rainbow Rowell
Azalea, Bramble, Clover, Delphinium, Evening Primrose, Flora, Goldenrod, Hollyhock, Ivy, Jessamine, Kale and Lily from Entwined by Heather Dixon
Claire and Miranda from For Real by Alison Cherry
Monday, Tuesday, Wednesday, Thursday, Friday, Saturday, and Sunday from Enchanted by Alethea Kontis
Mirabella, Katharine, and Arsinoe from Three Dark Crowns by Kendare Blake
Alice and Cellie from We’ll Never Be Apart by Emiko Jean
Isabelle and Aurora from Spindle Fire by Lexa Hillyer 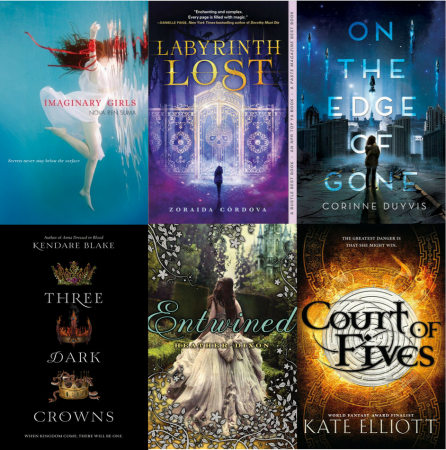 Montana and Arizona from Making Pretty by Corey Ann Haydu
Dess and Hope from Peas and Carrots by Tanita S. Davis
Kitty, Lara Jean, and Margot from To All the Boys I’ve Loved Before by Jenny Han
Alex, Lada, and Rose from Labyrinth Lost by Zoraida Cordova
Grace and Tippi from One by Sarah Crossan
Denise and Iris from On the Edge of Gone by Corinne Duyvis
Jin and Mei Yee from The Walled City by Ryan Graudin
Lorna and Callie from Iceling by Sasha Stephenson
Cara and Alice from The Accident Season by Moira Fowley-Doyle
Adelina and Violetta from The Young Elites by Marie Lu
Rose, Lily, Hyacinth, Jonquil, Violet, Poppy, Petunia, Daisy, Lilac, Iris, Orchid, and Pansy from Princess of the Midnight Ball by Jessica Day George
Ava and Lexi from The Third Twin by CJ Omololu
Joy and Grace from Please Don’t Tell by Laura Tims
Jena, Tatia, Iulia, Paula, and Stela from Wildwood Dancing by Juliet Marillier
Jessamy, Maraya, Bettany, Beth, and Amaya from Court of Fives by Kate Elliott

Who are your favorite YA sisters? Tweet us names at @PiqueBeyond.

Tags: corinne duyvis, lena coakley, On The Edge Of Gone, Worlds of Ink and Shadow
« Quote of the Week: THE STEEP AND THORNY WAY
20 September Books We Can’t Wait to Read »