Happy Release Day to THE EPIC CRUSH OF GENIE LO

It’s the release day for the highly anticipated The Epic Crush of Genie Lo by F.C. Yee. We’ve been talking about it to pretty much everyone we’ve met these past few months—and it appears we aren’t the only ones super excited that August 8 is finally here. In case the amazing premise hasn’t won you over yet, here’s what people around the web are saying about why they heart Genie Lo.

11. A personal note: I made a new shelf on GR bc it was just THAT good. This shelf is called ‘forever in my heart’ because it will be. So 😇.

The Epic Crush of Genie Lo is super compelling and so hard to put down. I do need to sleep soon though.

I LOVE GENIE LO. WHAT A GIFT HONESTLY.

I don’t even know what to say, as a Chinese girl who plays volleyball I related SO MUCH to Genie Lo…plus this book was hilarious.

14. The Epic Crush of Genie Lo by @yeebookauthor

The Epic Crush of Genie Lo is one of my favourite books of all time and one of the few books I’ve given 5/5 😭💛 You must read it! #broodychat

Me? Calling Genie Lo my fav fantasy heroine? NOT A LIE

Already lol’d and scared my dog while reading this. @yeebookauthor‘s THE EPIC CRUSH OF GENIE LO is the book my NJ-Asian self always wanted!! pic.twitter.com/6CyhyCRoQk

i have never related so much to a character in my ENTIRE LIFE. genie lo is literally ME & I AM HER, and THIS is why we need diVERSE STORIES

I’m reading Genie Lo by @yeebookauthor and I love it way too much what even. SHE IS SO RELATABLE (I’m Chinese) I LOVE GENIE. AND QUENTIN.

Okay, I’m gonna shut up after this but please read THE EPIC CRUSH OF GENIE LO. 💛 pic.twitter.com/WhP0mQsdXg

The Epic Crush of Genie Lo by FC Yee! It’s hilarious, romantic, action-packed, and has Chinese folklore in a way YA has never done before 😀

If Genie Lo isn’t on your radar yet what are you doing? It was such a fun and fresh delight props to @yeebookauthor for such an amazing book

#TheEpicCrush was absolutely amazing, and the book that my Chinese student heart was pining for while growing up.

*punches through wall* Y’all need to add #TheEpicCrushOfGenieLo by @yeebookauthor to your TBR!! and some fan art lmao bc I love these two pic.twitter.com/Efj6xtoSC3

Genie Lo once punched me in the face. It was awesome.

#TheEpicCrush was absolutely amazing, and the book that my Chinese student heart was pining for while growing up.

Genie Lo is honestly one of the funniest protagonists. I would’ve enjoyed the book for her alone even if I hadn’t liked the plot (but I did) 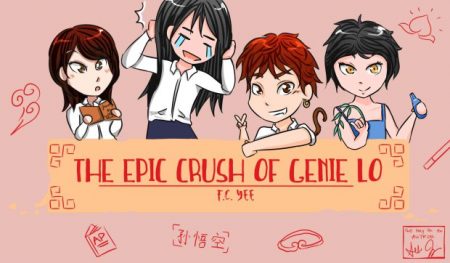 An epic book, chemistry notes, and fan art. What else do you need? . . . I adored #TheEpicCrushofGenieLo and will FIGHT ANYONE who disagrees. Every reader needs to get their hands on this one and the awesome, kickass characters. THE CHINESE FOLKLORE MADE MY LIFE OKAY. Thank you #FCYee forever. . . . #abrams #abramsbooks #weneeddiversebooks #bibliophile #youngadult #bookstagram

BOOK RECOMMENDATION TIME! ✨ so i recently read THE EPIC CRUSH OF GENIE LO by f. c. yee and i loved it so much. it’s already so hyped in book twitter so i thought i should talk about it here too, since i don’t see many people talking about it on instagram. this book is inspired by chinese myths and legends, and it’s so action-packed and funny and wonderful. genie lo, the main character, is just so relatable and i loved her from the first page. the writing is simple and funny. and it has a sequel coming out in 2018! so, you should definitely check this book out, and buy it as soon as it comes out (or pre-order it)! THE EPIC CRUSH OF GENIE LO, by f. c. yee, comes out august 8th, 2017. (btw you probably realized but this is totally photoshoped. i don’t have a physical copy of the book lol.) #theepiccrushofgenielo

How do *you* feel about The Epic Crush of Genie Lo? Share your thoughts on social media by using #EpicGenieLo and tagging @PiqueBeyond.