Headlines continue to bemoan the lack of interest young people have in politics – voting among younger generations are low, all young people are too caught up in their phones and electronics to care about politics.

Yet a lot of teens and kids are involved in politics – voluntarily or involuntarily. Kids get involved in school organizations with political relations – student governments have a variety of roles to choose from, and there are other clubs and organizations like D.A.R.E. and Reality Check that are against drugs and sometimes can have political ramifications. Other people start following politics from a young age, learning about the system and the politicians. Plenty of politicians also have kids and teens, forcing them to be involved on some level in politics, even if they don’t want to.

The fact is, politics still matter in the lives of teens. Sure, a lot of the things aren’t often thought of as political – immigration, abortion, human rights, health care. And then there are the things that teens can’t avoid like legislation around education, driving or voting ages. And because politics are an unavoidable part of many teens’ lives, they play a direct role in some major YA books. Check out some of our favorites below. 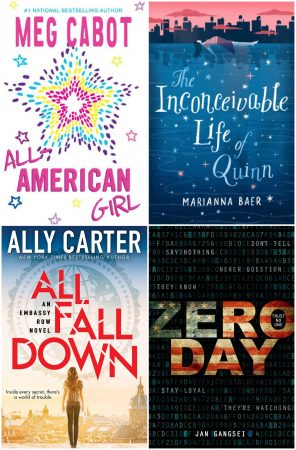 All-American Girl by Meg Cabot
The Inconceivable Life of Quinn by Marianna Baer
Red Girl, Blue Boy by Lauren Baratz-Logsted
Diplomatic Immunity by Brodi Ashton
The Fixer by Jennifer Lynn Barnes
The Wrong Side of Right by Jenn Marie Thorne
The President’s Daughter by Ellen Emerson White
The Lines We Cross by Randa Abdel-Fattah
A Mad, Wicked Folly by Sharon Biggs Waller
Interference by Kay Honeyman
All Fall Down by Ally Carter
Zero Day by Jan Gangsei
Sekret by Lindsay Smith
My Life Next Door by Huntley Fitzpatrick
The Unexpected Everything by Morgan Matson

Tags: Marianna Baer, The Inconceivable Life of Quinn
« The Many Ways to Change History for the YA Audience
Quote of the Week: ROSEBLOOD »