The Many Ways to Change History for the YA Audience

Anybody who studies history for just a little while can come up with ideas of how things could’ve been different. Hindsight is 20/20, after all. Looking back, there are small mistakes that didn’t have to be made, lives that could’ve been saved, geniuses who could’ve been recognized and found success in their lifetimes and not after. Alternatively, there are successes that could’ve been failures. It’s easy to imagine how the world could’ve changed if one little – or massive – thing turned out differently.

That’s what many writers do. They let historical figures live longer, fuller lives – they disappear instead of dying or a mysterious disappearance that likely ended in murder no longer does. So many of us love reading about and watching stories about the Romanovs, imagining Anastasia really did make it out alive. On the other hand, there are several YA books where authors imagine a world where the Nazis won WWII or the British won the American Revolution and the new way teen girls would’ve taken them down. Some examples include The Tsarina’s Daughter by Carolly Erickson and Rebel Mechanics by Shanna Swendson.

Other alternate histories reimagine the childhoods of famed figures – Anne Boleyn, Alexander Hamilton, the Brontes, Shakespeare, Jane Austen. Little is known about the younger years of many historical figures, so authors make up things that could be true, that could explain something that happened later, or they elaborate on what is known. Books like Alex and Eliza by Melissa de la Cruz, Worlds of Ink and Shadow by Lena Coakley, and I Was Jane Austen’s Best Friend by Cora Harrison all tackle this challenge. 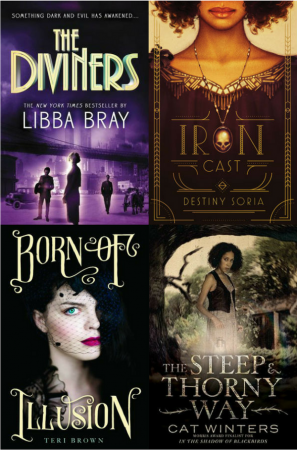 The last option is to just add magic. There are a lot of works of historical fiction that took history as it was and added in magic systems or paranormal aspects. This is a really popular option since fantasy aspects can really change how a story goes or the magic system can be a metaphor for the actual history. This includes books like The Diviners by Libba Bray, Iron Cast by Destiny Soria, Born of Illusion by Teri Brown, and The Steep and Thorny Way by Cat Winters.

What kind of alternate history do you love to read? The little changes, the expansions of reality, or the magical systems? Tweet us at @piquebeyond and let us know!

« Summer Reads: Books for All of Your Favorite Summer Activities
Teens in Politics »