Why Are Pre-Orders Such a Big Thing?

In recent years, the push for pre-orders has increased in the YA book world. With that push comes incredible incentives, including flights across the country. But what does a pre-order even do?

Pre-orders matter a lot in the life of a book and an author. A big pre-order push before a book’s release can lead to a larger first print – or even lead to more than one printing before the book even hits shelves. Every pre-order helps prove there’s interest in this book and this author, which gives publishers more reason to support the book and want to publish more by the author.

So, we can all see why pre-orders are awesome, right? You get the book as soon as possible, the author impresses their publisher, the publisher can put more behind the book and invest in the author again in the future.

These benefits have helped create the push for more and more pre-orders. And in order to get you to pre-order the books publishers and authors really want support for, there’s been an increase in pre-order giveaways. 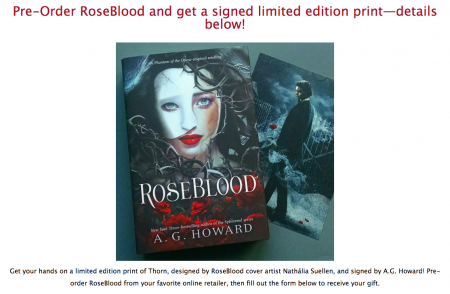 At first, if you submitted a receipt to prove you pre-ordered a book, you could get a bookmark, a signed bookplate, or temporary tattoos, just little things. But in the effort to get you to pre-order their book over anyone else’s, pre-order efforts have grown increasingly more elaborate. Authors and publishers are creating guaranteed signed pre-order copies, pins, quote cards, artwork, novellas you can get early and free access to, jewelry, and giveaways with fantastic prizes. Some of these prizes include tiaras and trips to meet the author. In 2017 alone, I’ve seen grand prizes chosen from two different people who submit pre-order proof to be flown into New York City, put up in a hotel, and get to meet the author personally. The first winner got to go to the author’s launch party afterwards, the second winner will be going to BookCon in the first weekend of June.

There are drawbacks to pre-order campaigns, though. For one thing, a lot of readers don’t hear about them unless they’re already following the author/publisher online. It’s hard to publicize them in stores and libraries where new readers could learn about them. Even fans of the author who are already pre-ordering online might not know about the incentives if they don’t follow the author online since they generally aren’t listed on online booksellers either. Another issue is that most of the incentives can’t be international – many authors can’t afford to ship internationally and many publishers can’t ship internationally because of legal reasons.

Then there’s the question of how effective pre-order giveaways are. It can be hard to judge if the numbers are that much higher strictly because of the incentives or if it’s because people are really just big fans of that author. And which incentives are the most popular?

I ran a poll on Twitter out of curiosity and received 362 votes. 40% of the responses – about 145 votes – indicated they had never been drawn in by a pre-order incentive. Of the remaining 60%, 20%  (72 votes) had only been influenced to pre-order once while the last 40% (145 votes) had been influenced by incentives multiple times. I also asked what incentives were most liked and answers indicated signed copies/bookplates are a big draw, as are book-specific items; the Windwitch socks and Six of Crows dice, as well as maps and artwork were all mentioned in the responses.

So, where do you stand on pre-order incentives? Do they help push you to pre-order when maybe you wouldn’t? Is there any specific swag that draws you in? Tweet us your thoughts @piquebeyond!