Kids Having Kids: Teen Pregnancy in YA

As a culture, we’ve always been fascinated by teen pregnancy. Historically, the most powerful families married off their children young and hoped for pregnant teens to continue their line. Young parents were common until fairly recently. And with society deciding parenthood should wait a few more years came an obsession with those who still had kids as teenagers.

In recent years, teen pregnancy has become part of pop culture. Gilmore Girls focused on Lorelai, who had her daughter as a teenager, and their lives sixteen years later. Juno was a small film about a teen girl’s romance, including her accidental pregnancy – a film that became a cult classic. MTV created an entire show called 16 and Pregnant, which lead to three different spin-off series of Teen Mom.

While we culturally consume a lot of media about teen pregnancy, actual teens who get pregnant are often vilified by those around them. They’re pressured to make choices surrounding their baby, judged for whatever choices they do make, and sometimes separated into different classes and schools from their peers.

Teen pregnancy rates in America continue to fall, but still continue to be higher than other western industrialized nations. Yet YA books on pregnancy, abortion, and motherhood are still important in order to get rid of the stigma. 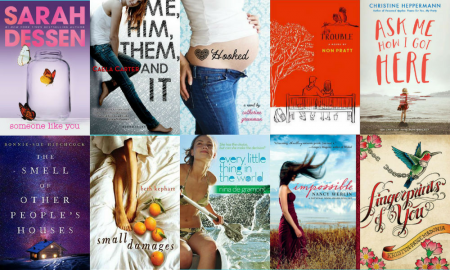 Exit, Pursued by a Bear by E.K. Johnston and Aftercare Instructions by Bonnie Pipkin are two titles that tackle abortion in very different, but very real ways. The Inconceivable Life of Quinn by Marianna Baer considers the fallout when a politician’s teen daughter gets pregnant with no memory of having sex. Bumped by Megan McCafferty and Mothership by Martin Leicht and Isla Neal consider teen pregnancy from sci-fi standpoints. How to Love by Katie Cotugno looks at a teen couple falling in love in the before, and then the after when the boy returns to his ex and their toddler. The Nature of Jade by Deb Caletti twists the idea by featuring a 20-year-old boy with a son as the love interest.

There are such a variety of ways to look at teen pregnancy and we’ve only scratched the surface. More titles I can recommend reading:

After by Amy Efaw
Jumping Off Swings by Jo Knowles
How to Save a Life by Sara Zarr
Someone Like You by Sarah Dessen
Me, Him, Them & It by Caela Carter
Hooked by Catherine Greenman
Trouble by Non Pratt
Ask Me How I Got Here by Christine Heppermann
The Smell of Other People’s Houses by Bonnie-Sue Hitchcock
Small Damages by Beth Kephart
Every Little Thing in the World by Nina de Gramont
Impossible by Nancy Werlin
Fingerprints of You by Kristen Madonia

Tags: Marianna Baer, The Inconceivable Life of Quinn
« Which Deadly Sin Are You?
The Death of Dystopian »
We have updated our Privacy Policy, effective May 25, 2018, to clarify how we collect and process your personal data. By continuing to use this website, you acknowledge that you have read and agree to the updated Privacy Policy. Read More Accept