When he was a senior in South Whidbey High School, my nephew Cole founded the “Sasquatch Research Association.” There were thirty members, all of them high school juniors or seniors. Every Saturday night, these kids would drive from the beachy, weekender town of Langley on the south end of Whidbey Island, with its boutiques, spa hotels, and four-star Greek restaurants, to the trails of Deception Pass State Park at the northernmost tip. There, they divided into teams of four, busted out their backpacks and flashlights, consulted maps, went on dark walks, and banged on trees with sticks. They might as well have been saying, “Yoo-hoo! Weird stuff! We’re here!” 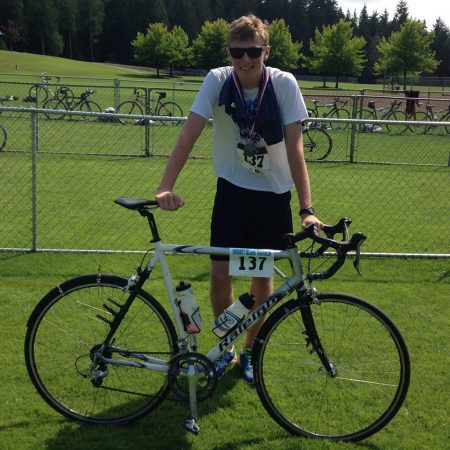 The Sasquatch Research Association is exactly what I love about Whidbey Island culture. It has its own unique relationship with the unknown. Don’t get me wrong—even if you live in downtown Seattle you’re likely to see something strange and wild every day. But Whidbey Island has a special relationship with the wild and strange. It’s not the sedate version of, “What did I just almost see?” you get on the mainland, nor is it too vast to contemplate, like miles and miles of dense forests in the Cascades or on the Olympic Peninsula.

Rather, when you spend time on Whidbey, the unknown is your neighbor. Spend any time on the island and you get the feeling that something wacky lives right next door. You don’t know what exactly to expect, but even if you live in a subdivision on the island, you just know that, if you take that extra step, peek around another corner, you’ll find something strange.

Does it help the mystique that, on Whidbey Island, a lot of these strange things live in places with really wacky names?

Yes, Deception Pass was named because it’s the strait that proved that Whidbey Island was an island and not a peninsula. Gotcha! You thought this long, skinny strip of land was hanging, like a booger, from the mainland, but check out this narrow, churning strip of water! It’s an island, baby!

For example: Say you’re Squatch. You’re wily. You like to hang out in heavily wooded areas. The kinds of places where moss grows on trees.

You’ve got your choice: Where would you choose to live, Deception Pass on Whidbey Island, or the Olympic Peninsula, where you could make your home in beautiful downtown Humptulips? Or if you’re super-angsty, at Point No Point?

Now, if you’re a discerning cryptid, Deception Pass is the best choice. Not only does it have over 4,000 acres of ancient forest, it’s got the cool name to go with it.

And then there’s our beloved Useless Bay. 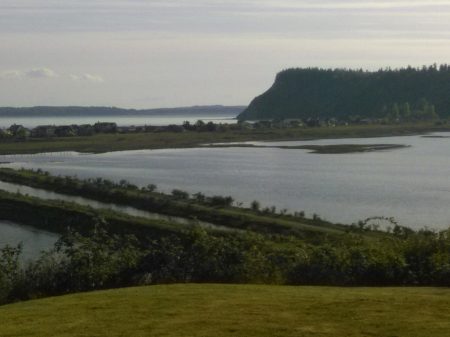 Yes, there’s a real house on Useless Bay, that’s sheltered our family, the Beaufrands, on weekends for the past twenty years, my sister’s family, the Zinks, full-time for seven years, and assorted grandparents, cousins, aunts, uncles, and friends, whenever they needed it, on whatever day of the week.

The house itself isn’t that great. The roof is made of wooden shingles. There are bats in the eaves and the power is always going out, but it sits on a bluff and beneath the bluff sit the mudflats, and beyond the flats is the best beach in the world.

Keep in mind that the Beaufrand family is discerning about the quality of our beaches. We’re half Venezuelan, which means we’ve spent time on tiny islands in the Caribbean, surrounded by impossibly blue waters, drinking fruity drinks from coconuts.

We still think Useless Bay is better. First of all because it’s immense. It was named by the Vancouver Expedition of 1792 because there was nowhere to moor, the bay itself is so shallow, which means when the tide’s out, there’s more than a half mile of sand to comb.

And the treasures the tide deposits! Not just sand dollars and moon snails, but pieces of boats, whole docks, signage from fishing companies that haven’t been in business for over forty years.

Every low tide reveals another mystery.

Would Useless Bay still be the best beach in the world if it were called something more appropriate to the landscape, say, Endless Cold Sand Bay? Well, yeah. We think the name has a kind of irony to it.

I decided to take an informal survey within my family. 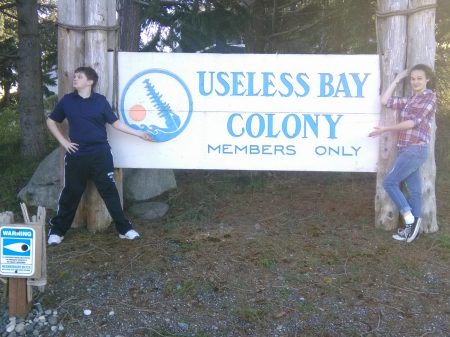 Sofia and Rick Beaufrand in front of the Useless Bay sign

“How? How is Useless Bay not useless?” I ask the Rickster. I have my own idea, and it has to do with beachcombing at low tide. It also has to do with being able to walk in the sand in any direction for an hour, and never reaching an interruption in the vast beach, but knowing—just knowing—that if you take one more step in any direction you’ll have gone beyond some kind of boundary, out of the world of man, only to be snatched up by something other, to be carried away into . . . .

“It’s so stinky.” Did I mention that Rickster likes robotics and engineering and when his schedule permits he’s a mathlete? Not a guy easily carried away into other realms.

But he’s right about the smell.

Those mysteries the tide deposits on the shore? A lot of them are dead and rotting, like halibut, and seals. Those corpses give off a whiff.

I try to get the Rickster to think a little more deeply about what makes Useless Bay so special, because I think he’s got an idea. He might be like me, just having a hard time putting it into words. “If it were just a stinky place, we wouldn’t love it so much,” I prompt him.

“Oh.” He ponders. “You know what’s cool? You don’t have to talk to other people.”

That’s another benefit of knocking around on a landscape as broad as Whidbey. Not only do you not have to talk to people, you can be with your own thoughts and no one will give you a hard time.

“Okay,” I say, thinking I’m done with my survey, and that’s the end of his contribution to the topic of “What Makes Whidbey Whidbey.”

But then he blurts out something I hadn’t foreseen.

Like most teenage boys, Rick hates love. Or at least, the kind of love that I deal out, with the forehead smooching and saying at the same time, “I love you so much, sweetie. Did you use your Axe for Men this morning? Cause you should use it every day.”

So when he says the word “love,” I counter with, “What? You? Seriously? What kind of love are you talking about?”

I mean, that special love between a dude and his iPad? Okay. I see that in his eyes every time I try to pull him away from his electronics.

Or that bond between a guy and his giant, galumphing puppy? I can see that, too. He and the Saint Bernard are inseparable.

And about how, living on an island not only means having a gateway to the unknown, it means having a place to come back to, surrounded by people who appreciate you and are ready to hear of your adventures and share some of their own. 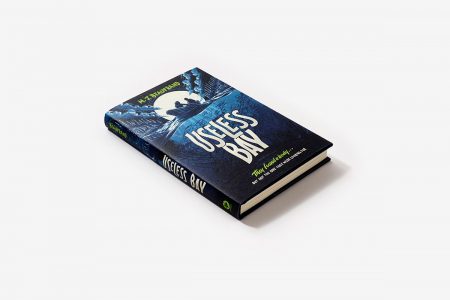 Sometimes I think the mystique of Whidbey exists in the telling of it.

On the back deck of the cold and damp house on Whidbey itself doesn’t get much love, but the back deck does. We all gather, in the firelight, under many layers of sweaters and blankets, surrounded by a ton of citronella candles, as the bats and barn owls swoop overhead, and talk about our day. It may just be four of us. Or seven, if the Zink cousins are there. Maybe nine if Cole’s friends drop by, or Granny and Grandpa are there for a visit. The configurations change, but the conversations are almost always the same. There’s always something found or something just missed.

“A sea lion was sunbathing on the roof of my car.”

“I walked up to this log and what I thought was a small deer turned out to be a golden eagle.”

“I saw a coyote sign on the trail this morning but no coyote.”

It’s on one of these nights that we learn about the Sasquatch Research Association.

It’s my nephew Cole’s graduation party. A bigger crowd than usual has gathered to celebrate. We’re grilling kielbasa, which kind of—but not quite—masks the rotting smell wafting up from the beach below the bluff.

It’s not quite time for s’mores, but it is time for citronella. The bats and the barn owl haven’t come out yet; but the mosquitos are ready to strike.

Cole wants to spend time with his friends who are also graduates, and playing a pick-up game of badminton on the lawn. The rules are simple, no matter what game you play in the back yard: over the bluff is out.

Cole takes a break from his game and chats with the rest of us, the uncles and aunts and cousins and grandparents, hanging out around the barbecue.

The subject of the Sasquatch Research Association comes up. Did they ever find anything? We want to know.

Cole tells us about the Association and how it worked. He talks about how, on one of these expeditions to Deception Pass, one of the teams of four went out like they were supposed to, banged on a certain tree trunk, and something banged back.

“So?” Rickster says, his eyes wide, too enraptured by the story to eat one of the two kielbasas he has on his paper plate. “Was it him? Was it Squatch?”

“It was probably a deer,” Cole says, and is dished up a freshly-grilled sausage. He’s standing in a circle of at least twelve people. No one else says a word. None of us is satisfied with his answer. Even to my budding-scientist son, it’s anti-climactic.

And Cole, who, like my son, is giant and literal-minded, can sense that.

“. . . but nobody saw for sure,” he amends. “That team was sure spooked. I suppose it could’ve been Squatch.”

There are rumblings and we all go back to what we were doing before Cole started his tale. We’re appeased.

I look around the firelight at this gathering of people and think about how we in ourselves might be a puzzle, an equation. We’re all happy to be here, happy for each other’s company, happy even for the stink wafting up from the beach below.

But as soon as Cole started talking, every single one of us needed something else. And it’s that something else that I believe drove thirty teenagers to join the Sasquatch Research Association to begin with. It has to do with being on an island, and not just living, but thriving on mysteries deposited on our shores every morning.

We don’t need the strange itself, just the possibility of it.

We all need the tale.

Tags: M.J. Beaufrand, useless bay
« The Importance of Female Friendships in YA
The Less Traditional Retellings »