The Importance of Female Friendships in YA

For a long time as a kid, I didn’t want to be friends with girls. Girls were catty and mean and fake – everybody said so. As I grew into a teenager, however, I turned away from that line of thinking, partly because I met some really amazing girls who were so important to me and partly because of the books I started reading. 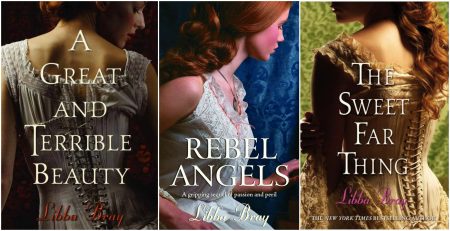 I picked up books about Princess Amelia Mignonette Grimaldi Thermopolis Renaldo and Lilly Moskowitz, Sara Crewe and Becky – friends who had very different lives, but made it work. Probably the most important, formative book about friendship between girls was the Gemma Doyle trilogy. Gemma, Felicity, Pippa, and Ann were the unlikeliest of friends, and yet they were perfect together. They didn’t always agree, they didn’t think the same, they didn’t even really want to be friends to start with. Those girls were friends and enemies and, at the end of it all, they loved each other.

Iron Cast by Destiny Soria is the most recent book I’ve read that gave me the same feeling as the Gemma Doyle trilogy, even though the book’s plot is more like Libba Bray’s Diviners series. Ada Navarra is the daughter of immigrants while Corinne Wells is an heiress. The two of them end up working for the same nightclub and become best friends, almost sisters. Their relationship is more important than the ones they have with their families and significant others. Ada and Corinne are so in tune, even their magic compliments each other.

While reading Iron Cast, I couldn’t help but think of how important YA books centered around female friendships are. Girls are constantly portrayed as enemies in the media. The book and HBO show Big Little Lies is about mothers fighting each other. Most people have heard of the Taylor Swift/Katy Perry feud. And we can’t forget about those “must-see” movies like Mean Girls that are all about girls hurting each other.

Girls are often seen as competition – for jobs, for grades, for men, for the best body. Legally Blonde, another cinematic classic, has Elle and Vivian fighting each other for three of those four things until the end of the movie. From a young age, we’re conditioned not to trust other girls.

Yet none of it’s true. There is no competition with other women that’s worth hating other women over. In fact, there’s a whole theory – the Shine Theory – that ladies surrounding themselves with successful ladies helps them be more successful. Being friends with other girls who succeed, helps all girls succeed, even if it seems like they’re getting the opportunities you want.

Which is why YA books showing fantastic, strong friendships between girls is so important. Luckily books like Iron Cast, as well as Open Road Summer, Truthwitch, Exit, and Done Dirt Cheap, exist. Sure, all of them are different. But they all center around girls who love and uplift each other, which is what every girl deserves.