POLL: Which April YA Cover is Your Favorite?

The Inconceivable Life of Quinn by Marianna Baer follows 16-year-old Quinn Cutler, daughter of a high-profile Brooklyn politician, who has mysteriously become pregnant (read: she has no memory of ever having sex). Religious fanatics gather at the Cutlers’ home, believing Quinn is a virgin, pregnant with the next messiah. Quinn’s desperate search for answers uncovers lies and family secrets—strange, possibly supernatural ones. Might she, in fact, be a virgin?

The Last Thing You Said by Sara Biren follows Lucy and Ben, whose lives instantly changed last summer when Trixie, Lucy’s BFF—and Ben’s sister—suddenly passed away. Now it’s a year later in their small lake town, and as the anniversary of Trixie’s death looms, Lucy and Ben’s undeniable connection pulls them back together. They can’t change what happened the day they lost Trixie, but the summer might finally bring them closer to healing—and to each other.

Two very different stories, with two totally different looks. And before you go picking them up, we want to know which cover is your favorite. Cast your vote below! 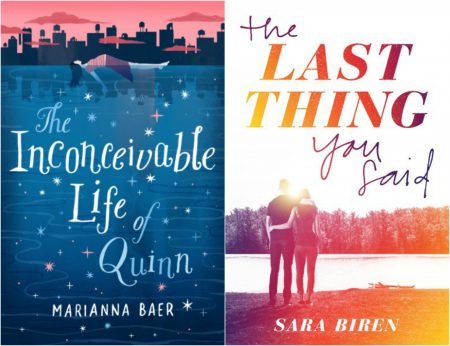