A. G. Howard Announces Next Book

If you’re an A. G. Howard fan, you know she does retellings right. We’ve seen her tackle Alice in Wonderland with her Splintered series, and most recently the Phantom of the Opera with her modern-day RoseBlood tale.

Fans are constantly posting on social media about the next story that should be A. G. Howard-ified—and it seems like we have our answer!

Just this week, Publishers Weekly shared the news that A. G.’s next story is inspired by none other than The Princess and the Pea.

Titled Stain, it’s described as a “high-fantasy gothic fairytale retelling in which a mute princess, to win back her kingdom of daylight, save her prince, and conquer the land of the night, must prove herself everything a traditional princess is not.”

Sounds incredible, right? Teasing us even more, A. G. took to her Facebook page to share a glimpse at the storyboard for her work in progress. 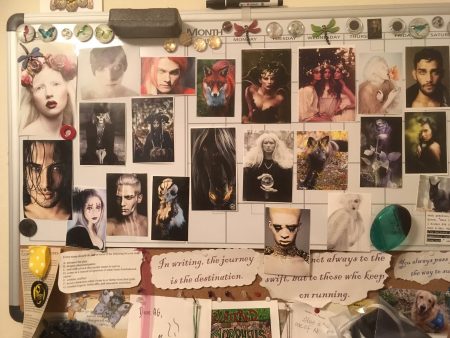 “This is set in a fantasy medieval land, and there’s a lot of world-building and magic, which requires more work than any story I’ve ever written,” A. G. says of the book. And while it’s not due out until 2019, she promises to “make it worth the wait.”

Are you excited for Stain? Tweet us your reaction at @PiqueBeyond.