Ride or Die. Write or Die.

Writing at times feels like a superpower, unwieldy in my hands, not something I’m fully in control of, but a power that lets me raise my fingers and pull fragments of my world together into something new and beautiful. I can point to shards of glinting glass in the whole and talk about how that piece came to be. Done Dirt Cheap came from many places in my life and history. But for today, I want to tell you how it almost never happened.* 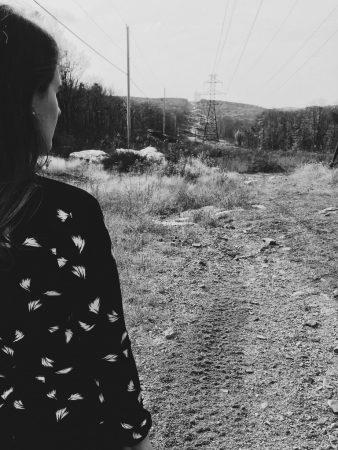 There’s an unspoken rule in Art: Don’t talk about how much you suck, your fear, or how tenuous it feels. Unless it’s in a self-deprecating show of humility as someone is handing you the Pulitzer.

It’s part of success—the sheen of it, like a rainbow slick of oil on water.

But I’m not always great with rules and clear water is better than oil.

Done Dirt Cheap only happened because of a lesson I had learned a long time ago, on the back of a monster dirt-bike, on which I couldn’t touch the ground even when I pointed my toes.

I was fourteen, living in a part of the world that was only valuable for its minerals. My landscape had been stripped, clawed at, dug under and left behind as garbage. Our groundwater was tainted. Our basements full of radiation. Our streams clogged with weird foams and slick spools of dark muck. We had dug too deep and a darkness hung over everything.

In the strip mines, I found a place I could breathe. In those raped and forgotten places I could string together forty or more miles of new life. The landscape would rise and fight with me, and together we wouldn’t be forgotten girl and forgotten land, but two things who were still alive and able to grasp at our fate. It brutalised me to make me. I was in every way, an average, bookish, fourteen-year-old girl with a fear so strong it came out as teeth. But out in the mines, I was free of that skin. I could fly. I could see a line and fight my way to the end. I could fall, pitch over the handlebars, run my bike up a tree, flip end over end and still stand, pick up the bike, and begin again. Just writing this, fifteen years later, I can still feel the pump in my arms from wrestling the dirt-bike on the thin threads of trails that wound around deep, sentient holes of green water, cone mountains of slag and silt, and grated air shafts leading into the abyss.

“Treskow” was a route we took often—named after the tiny old mining town it began in. We rode through the woods, along an old railroad bed with no tracks, before dropping down a slippery rock covered mountain into an uninhabited valley. I would drag my back brake the whole way down, my teeth chattering from the rocks. But the real challenge was at the end of the mud-holed valley. We always stopped and craned our necks at the steep switchback of the mountain ahead. It made me sick to look at it, every time. By that point, there was no way to get home and no way to give up. I wanted to be there, but hadn’t known how terrifying it was going to be. Every time.

When I started Done Dirt Cheap, that’s where I was – at the bottom of a giant switchback, too far from home and looking up at the power lines humming between transformers while everyone else sped ahead of me.

In those tenuous moments where you are balancing on the edge of failure, the natural desire is to hold back. You think “Oh I’ll go slow and easy and pick my way up.” But in slippy slag and miles of steep switchbacks, you simply will run out of power. Each switchback has to be hit hard and powered through, or you’ll never make it to the top. There is no easing through the terrain.  Manoeuvre swiftly or you’ll pitch over the edge. So, with this book, I was miles deep into publishing terrain. I had failed a lot. I had dragged my back brake down the mountain and even though, yes, I was out there, I was at the back of the crowd, wishing I was at home. Uncertain I could actually do this.

Looking ahead, I wanted nothing more than to go slow and safe. Something sure. But I had been here before. I knew what held me back was fear.  This was the moment in riding where you have to pin back that throttle and ride with your jaw tight and your stomach in your throat.

And just like in riding, I prayed and held on and hoped for the best. With Done Dirt Cheap, I somehow popped over the top of that switchback with the valley below me and the sky above. I’m further than I ever expected to be.

Further, but with miles to go. I know the trail still—how it winds over the ridge before dropping down again and then taking me through another technical mountain crossing. I’m leaning over the gas tank, holding the throttle back. The wind is whipping my hair and I taste elation, panic, and dust in my mouth. All I can do is hope the trail keeps up with me, and I keep up with the trail.

Ride or die. Write or die.