Seven Dating Personalities According To Love 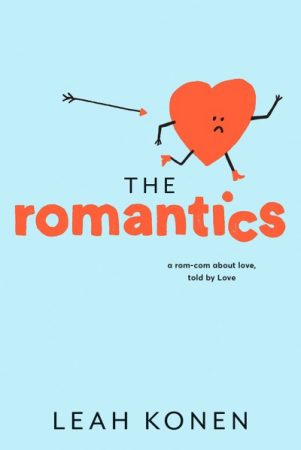 Have you gotten your hands on Leah Konen’s The Romantics yet? It’s a fresh and funny romantic comedy in which one boy’s tangled love life is narrated by Love herself.

“From being utterly depressed to one of the best adventures I’ve been on in a while this is what every broken hearted romantic needs to read,” one reviewer says of what she deems, “the young adult romance of the year.”

One of the things we love about Love is her sauciness and tongue-in-cheek wit. Just take one look at the seven different romantic personality types she defines throughout the book. Author Leah Konen recently took to her blog to share said personality types, and we’re recapping them for you below.

No joke, it’s been getting us thinking about the type of “dater” we’d consider ourselves—especially with “cuffing season” in full effect. What about you? Tweet @piquebeyond and let us know which type you think you are. 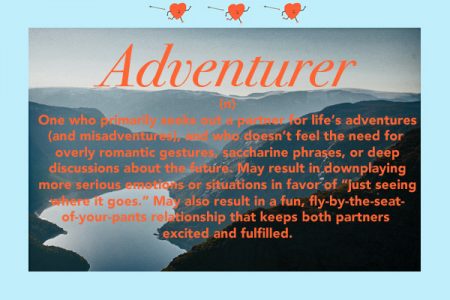 (n): One who primarily seeks out a partner for life’s adventures (and misadventures), and who doesn’t feel the need for overly romantic gestures, saccharine phrases, or deep discussions about the future. May result in downplaying more serious emotions or situations in favor of “just seeing where it goes.” May also result in a fun, fly-by-the-seat-of-your-pants relationship that keeps both partners excited and fulfilled. 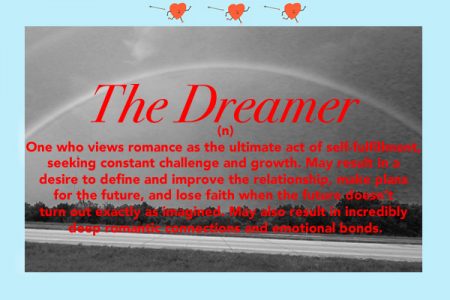 (n): One who views romance as the ultimate act of self-fulfillment, seeking constant challenge and growth. May result in a desire to define and improve the relationship, make plans for the future, and lose faith when the future doesn’t turn out exactly as imagined. May also result in incredibly deep romantic connections and emotional bonds.

(n): One whose greatest strength when it comes to love is his or her devotion; one who may not fall as fast as the Romantic, but who falls way more deeply when it happens. May result in clinging to the past, overlooking a partner’s flaws, and, frankly, allowing oneself to be walked all over. May also result in a knack for forgiveness that
gives one the space to heal and love again. 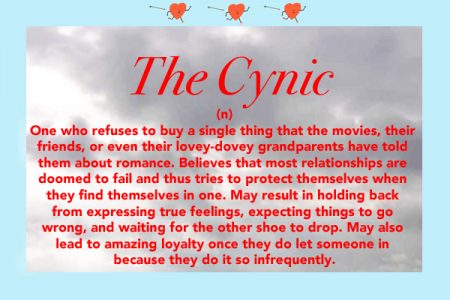 (n): One who refuses to buy a single thing that the movies, their friends, or even their lovey-dovey grandparents have told them about romance. Believes that most relationships are doomed to fail and thus tries to protect themselves when they find themselves in one. May result in holding back from expressing true feelings, expecting things to go wrong, and waiting for the other shoe to drop. May also lead to amazing loyalty once they do let someone in because they do it so infrequently. 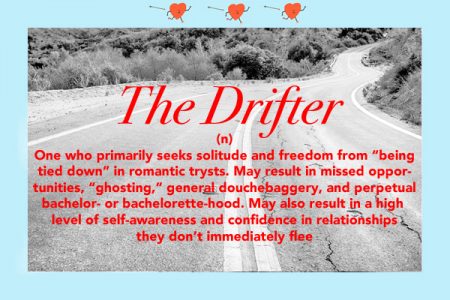 (n): One who primarily seeks solitude and freedom from “being tied down” in romantic trysts. May result in missed opportunities, “ghosting,” general douchebaggery, and perpetual bachelor- or bachelorette-hood. May also result in a high level of self-awareness and confidence in relationships they don’t immediately flee. 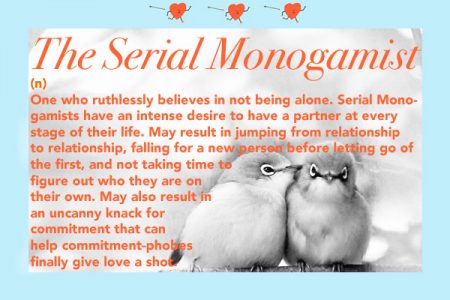 (n): One who ruthlessly believes in not being alone. Serial Monogamists have an intense desire to have a partner at every stage of their life. May result in jumping from relationship to relationship, falling for a new person before letting go of the first, and not taking time to figure out who they are on their own. May also result in an uncanny knack for commitment that can help commitment-phobes finally give love a shot. 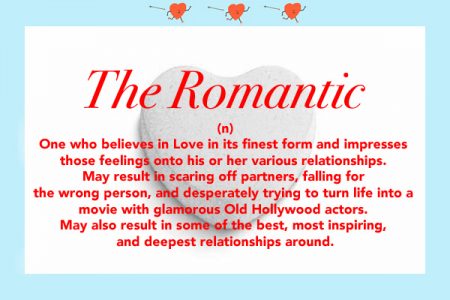 (n): One who believes in Love in its finest form and impresses those feelings onto his or her various relationships. May result in scaring off partners, falling for the wrong person, and desperately trying to turn life into a movie with glamorous Old Hollywood actors. May also result in some of the best, most inspiring, and deepest relationships around.

Take a peek at Leah Konen’s The Romantics, here.

Tags: leah konen, The Romantics
« NaNoWriMo, and All the Things You Don’t Know
Characterization »