Quote of the Week: IRON CAST by Destiny Soria 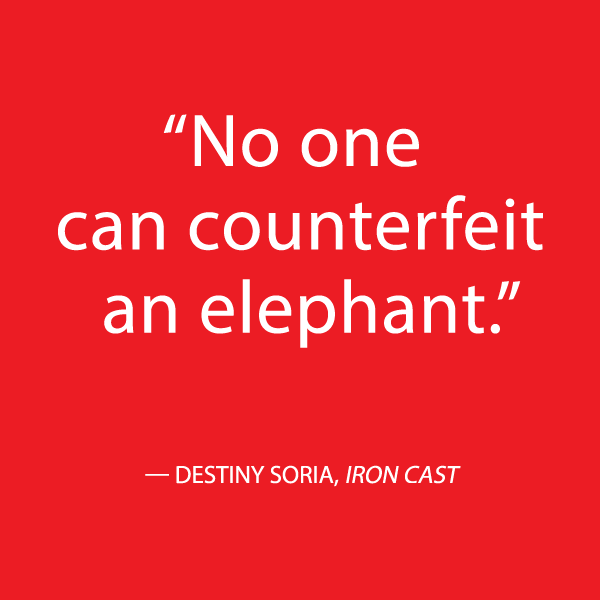 “The Bengali banker is a long con based on the pig in a poke. But instead of foreign banknotes, we used elephants.”

“Currency can be counterfeit. No one’s going to pay for foreign bills without having them examined. When Ned Turner saw those elephants, he was practically throwing money at us. No one can counterfeit an elephant.”

Today’s Quote of the Week is from Iron Cast by Destiny Soria, the perfect next read for fans of Libba Bray’s The Diviners.

It’s Boston, 1919, and the Cast Iron club is packed. On stage, hemopaths—whose “afflicted” blood gives them the ability to create illusions through art—Corinne and Ada have been best friends ever since infamous gangster Johnny Dervish recruited them into his circle. By night they perform for Johnny’s crowds, and by day they con Boston’s elite. When a job goes wrong and Ada is imprisoned, she realizes how precarious their position is. After she escapes, two of the Cast Iron’s hires are shot, and Johnny disappears. With the law closing in, Corinne and Ada are forced to hunt for answers, even as betrayal faces them at every turn.