Find your next YA nonfiction read

Always wanted to read nonfiction, but never knew where to start? Then maybe this will help: a list of amazing YA nonfiction! 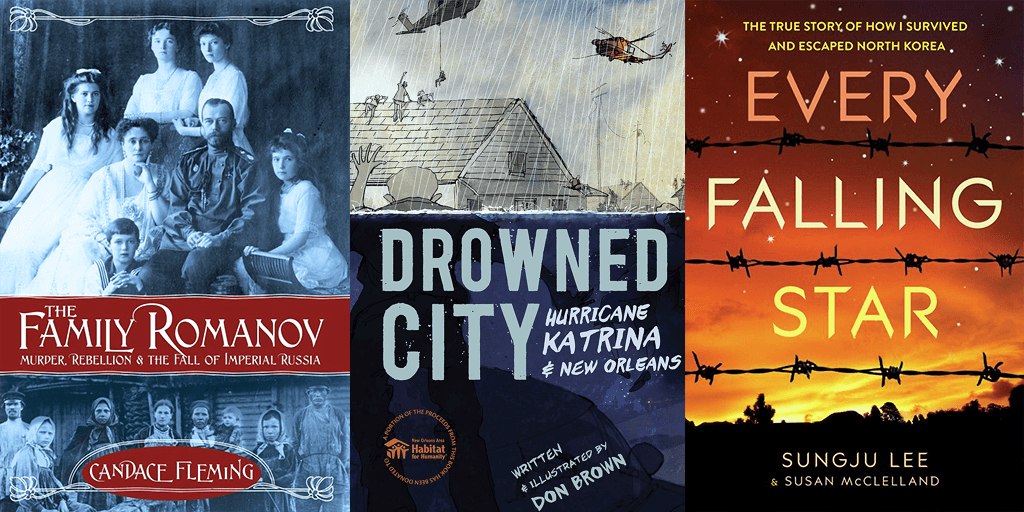 The Family Romanov: Murder, Rebellion, and the Fall of Imperial Russia by Candace Fleming
Here is the tumultuous, heartrending, true story of the Romanovs—at once an intimate portrait of Russia’s last royal family and a gripping account of its undoing. Using captivating photos and compelling first person accounts, award-winning author Candace Fleming (Amelia Lost; The Lincolns) deftly maneuvers between the imperial family’s extravagant lives and the plight of Russia’s poor masses, making this an utterly mesmerizing read as well as a perfect resource for meeting Common Core standards.

Drowned City: Hurricane Katrina and New Orleans by Don Brown
On August 29, 2005, Hurricane Katrina’s monstrous winds and surging water overwhelmed the protective levees around low-lying New Orleans, Louisiana. Eighty percent of the city flooded, in some places under twenty feet of water. Property damages across the Gulf Coast topped $100 billion. One thousand eight hundred and thirty-three people lost their lives. The tale of this historic storm and the drowning of an American city is one of selflessness, heroism, and courage—and also of incompetence, racism, and criminality.

Every Falling Star by Sungju Lee
Every Falling Star, the first book to portray contemporary North Korea to a young audience, is the intense memoir of a North Korean boy named Sungju who is forced at age twelve to live on the streets and fend for himself. To survive, Sungju creates a gang and lives by thieving, fighting, begging, and stealing rides on cargo trains. Sungju richly re-creates his scabrous story, depicting what it was like for a boy alone to create a new family with his gang, his “brothers”; to be hungry and to fear arrest, imprisonment, and even execution. This riveting memoir allows young readers to learn about other cultures where freedoms they take for granted do not exist.

Read an excerpt of Every Falling Star here on Pique! 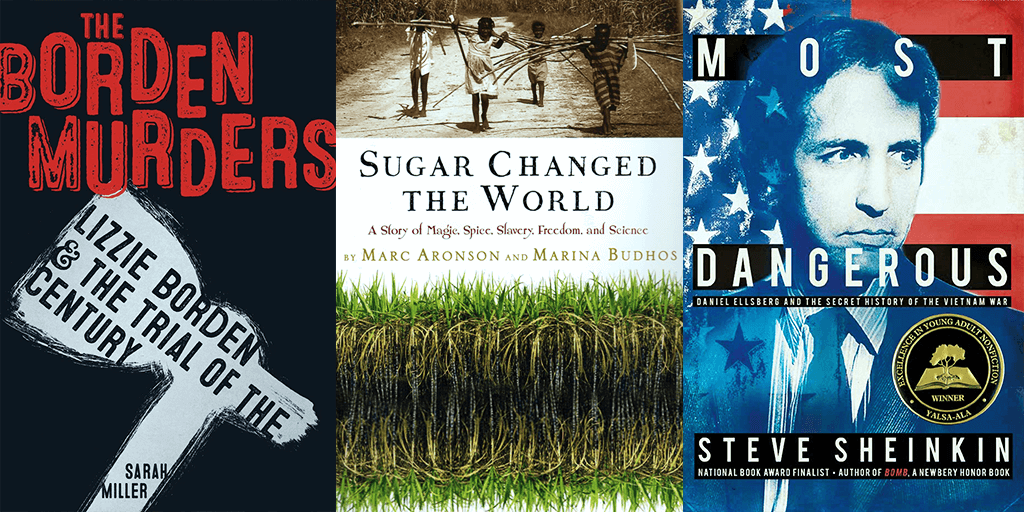 Covers, left to right: The Borden Murders by Sarah Miller, Sugar Changed the World by Marc Aronson and Marina Budhos, Most Dangerous by Steve Sheinkin

Sugar Changed the World by Marc Aronson and Marina Budhos
When this award-winning husband-and-wife team discovered that they each had sugar in their family history, they were inspired to trace the globe-spanning story of the sweet substance and to seek out the voices of those who led bitter sugar lives. The trail ran like a bright band from religious ceremonies in India to Europe’s Middle Ages, then on to Columbus, who brought the first cane cuttings to the Americas. Sugar was the substance that drove the bloody slave trade and caused the loss of countless lives but it also planted the seeds of revolution that led to freedom in the American colonies, Haiti, and France.

Looking for your next read? Check out the list of #yalit nonfiction at @piquebeyond!

The Borden Murders by Sarah Miller
Miller takes readers along as she investigates a brutal crime: the August 4, 1892, murders of wealthy and prominent Andrew and Abby Borden. The accused? Mild-mannered and highly respected Lizzie Borden, daughter of Andrew and stepdaughter of Abby. Most of what is known about Lizzie’s arrest and subsequent trial (and acquittal) comes from sensationalized newspaper reports; as Miller sorts fact from fiction, and as a legal battle gets under way, a portrait of a woman and a town emerges.

Most Dangerous by Steve Sheinkin
Learn about what the Times deemed “the greatest story of the century”: how Daniel Ellsberg transformed from obscure government analyst into “the most dangerous man in America,” and risked everything to expose the government’s deceit. In 1971, the front page of the New York Times announced the existence of documents known as The Pentagon Papers containing a secret history of the Vietnam War. Chronicling every action the government had taken in the Vietnam War, they revealed a pattern of deception spanning over twenty years and four presidencies, and forever changed the relationship between American citizens and the politicians claiming to represent their interests. 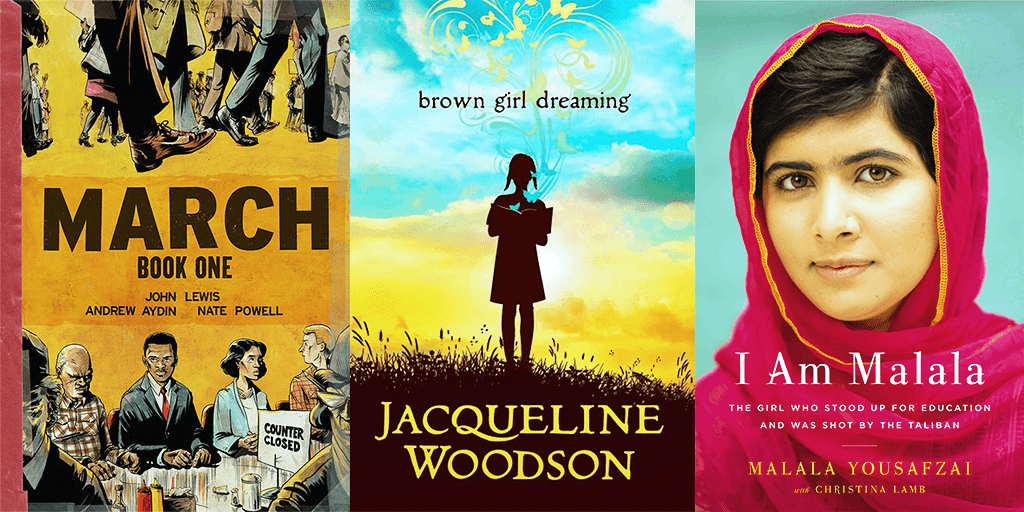 Covers, left to right: March by John Lewis, Brown Girl Dreaming by Jacqueline Woodson and I Am Malala by Malala

Brown Girl Dreaming by Jacqueline Woodson
Raised in South Carolina and New York, Woodson always felt halfway home in each place. In vivid poems, she shares what it was like to grow up as an African American in the 1960s and 1970s, living with the remnants of Jim Crow and her growing awareness of the Civil Rights movement. Touching and powerful, each poem is both accessible and emotionally charged, each line a glimpse into a child’s soul as she searches for her place in the world. Woodson’s eloquent poetry also reflects the joy of finding her voice through writing stories, despite the fact that she struggled with reading as a child. Her love of stories inspired her and stayed with her, creating the first sparks of the gifted writer she was to become.

I Am Malala by Malala Yousafzai
When the Taliban took control of the Swat Valley in Pakistan, one girl spoke out. Malala Yousafzai refused to be silenced and fought for her right to an education. When she was fifteen, she was shot in the head at point-blank range while riding the bus home from school, and few expected her to survive. Instead, Malala’s miraculous recovery has taken her on an extraordinary journey from a remote valley in northern Pakistan to the halls of the United Nations in New York. At sixteen, she has become a global symbol of peaceful protest and the youngest-ever Nobel Peace Prize laureate.

March: Book One by John Lewis
March is a vivid first-hand account of John Lewis’ lifelong struggle for civil and human rights, meditating in the modern age on the distance traveled since the days of Jim Crow and segregation. Rooted in Lewis’ personal story, it also reflects on the highs and lows of the broader civil rights movement. Book One spans John Lewis’ youth in rural Alabama, his life-changing meeting with Martin Luther King, Jr., the birth of the Nashville Student Movement, and their battle to tear down segregation through nonviolent lunch counter sit-ins, building to a stunning climax on the steps of City Hall.