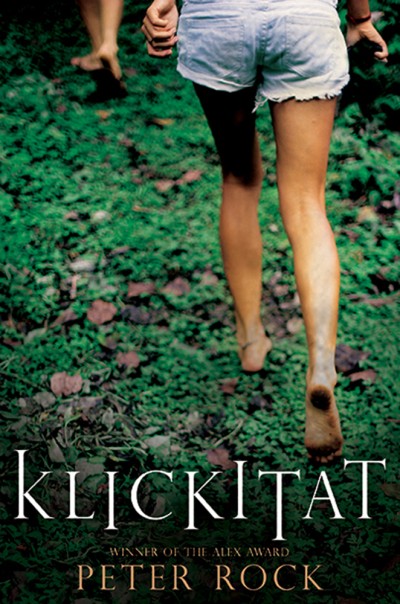 Klickitat is a story of sisters and survival, of how we listen to one another and how the promises we make can become broken. Abrams editor, Tamar Brazis, asks Peter Rock 10 questions about the world of Klickitat, from its fabled setting to its most-inspiring tattoos.

1. Klickitat is a book about sisters and it’s no coincidence that your characters, Vivian and Audra, live near Klickitat Street in Portland, the street on which two famous literary sisters, Ramona and Beezus, lived. Ransom Riggs called your book “Beverly Cleary by way of David  Lynch.” How are these pairs of sisters connected and how important is the setting of Klickitat Street, Portland, and the eerie Pacific Northwest in your book?

This connection came from a few different directions.  First, I just liked the sound of the word “Klickitat,” and then its translation: beyond.  I just had that in my head the whole time.  And then I was reading Beverly Cleary to my daughters, and was so moved by how ably she captures the energy between sisters, especially big and little sisters, and how that dynamic kicks up electricity.  So my decision to set the story in Portland was no surprise, as I started out writing a story for my daughters, and wanted them to see that connection, and one with themselves (in hindsight, this last connection isn’t one I’d necessarily wish), and then I like that neighborhood, and having my fictional sisters aware of Beezus and Ramona, and the fact that they could’ve attended Beverly Cleary Elementary, and know the statues of Ramona and Henry and Ribsy (no Beezus!) up there–that was all too good to pass up.  The eeriness is built in.  So many gray skies, so much shadow, so many people hurrying through rain.

2. There seems to be something in the air with survivalist stories lately. Your character Audra wants to practice wilderness survival and is inspired by a writer and naturalist named Tom Brown, Jr. How did you first encounter Brown’s work and why do you think Audra is so enamored with him?

Several years ago I was working on a book, The Shelter Cycle, which was inspired by a church in Montana that believed the world might/would end in 1990, and built vast underground shelters, where they planned to live for up to seven years. I was driving around this strange landscape, above where various shelters were buried, with one of these believers, and he told me that one night, deep underground, another member of the church told him about Tom Brown, Jr., a “true adept,” and so I started reading Brown’s works.  One of my contacts had even gone to the special training camps Brown runs out in the wilderness of New Jersey–part of what draws Audra, and anyone, is this sense that if we were more attuned, as animals are, to our environment, we’d be both happier and more aware of all the invisible signs around us.  I myself almost got some research money to go train with Brown.  His story is fascinating, too; he claims to have had various lessons and wisdom passed down to him from “Grandfather,” a Native American who took Brown under his wing, but many suspect that story is not true, so there are many haters.  But Brown’s books are fascinating; I have spent an especially large time reading his books about how children might survive in the wilderness, and how they might be more capable than adults.  My eldest daughter, for what it’s worth, is currently enrolled as an apprentice in “Tracker’s Camp” where she learns which wild plants are edible, how to make fire without matches, etc.–all taught by heavily tattooed “guides” with facial piercings who wear Utili-Kilits.  Pure Portlandia.

3. Portland’s Forest Park appears in many of your books. What’s special about this park and do you spend a lot of time practicing wilderness survival there?

It’s crazy!  Largest wilderness area inside a city in the world. There are great trails, but so much of the park is impossible to really navigate.  So many homeless people live there, so close to the city.  Yes, I have done insane things there.  But I’ve also had a student who spent several nights hiking the back areas.  Before I had children and had to be home I’d often ride my bike over there and climb around in the trees, just watching . . . It’s a vastly strange place.  I also recommend Colin Meloy and Carson Ellis’s Wildwood as a way into that forest.

4. Klickitat is a haunting, and at times mystifying, novel. Instead of providing answers, it often prompts more questions instead. How important is it for you as an author to allow the reader to come to her own conclusions? Do you worry about your authorial intentions not being understood?

Somewhere Raymond Carver says something like, “I’m much more concerned with my characters, and what they’re going through, and how they understand things, than any writer.”  That’s more or less how I feel.  I also am attuned to what Julio Cortazar is getting at when he says, “Tell the story as if it is only of interest to the small circle of your characters, of which you may be one.  There is no other way to put life into the story.”  So that is my experience.  I don’t wish to fully mystify any reader, but I certainly want them to have their own experience, to come to their own conclusions.  To believe that there’s a specific way to understand things, that I need readers to “get” some kind of message that I’m sending–that’s a recipe for disaster and sadness.  This world is too messy to believe in that kind of thing.

5.  Who was your favorite writer when you were a teenager?

Richard Brautigan, author of Trout Fishing in America and In Watermelon Sugar, among many others.  He had the ability to write these wonderfully whimsical stories, these amazing sentences, to really capture a certain kind of sad and sweet energy.  My parents gave me In Watermelon Sugar for Christmas one year; what a strange present!  This story, about a kind of tragic hippie-like community, is so wonderfully realized and dark, full of tortured romance and lyricism.  Also, I just liked the idea of Brautigan, who appeared to be this ungainly, whimsical man with a walrus mustache–he cultivated a resemblance to Mark Twain–who evidently (based on book covers) was a magnet for beautiful women.

6. Communication is an important theme in Klickitat. Words mysteriously appear in Vivian’s notebook, her dad sends signals via radio waves, Vivian and Audra decide not to verbally speak when they are in hiding. You seem to be exploring how people choose to express themselves and also how they choose to listen to one another. What does this say about the characters, and in our current age, is communication easier or more labored?

More labored, but more frenetic, too.  You can feel the vibrations. And as the many ways that communication is more apparent–texts, emails, advertisements, tweets, whatever–there is, I believe, an insistent and invisible series of signals.  And we must see and believe that this is sweet.

7. Is yellow your favorite color?

I love colors so much.  LOVE THEM.  Colors and weather:  what more could there be?  How more fortunate could we be, to be in this world?  I admire yellow a great deal–I also am a deep admirer of Van Gogh, who was of course in love with yellow.  So it’s up there. But I have to admit that I’ve come to terms with the fact that, boring as it is, blue is probably my favorite (see swimming answer).  Maggie Nelson’s astounding book–one of my very favorites–Bluets really helped with this.  Yellow, orange, blue: top three.  But green is so sweet, our friend.

8. You’ve had some interesting jobs in addition to being an author and writing professor (rancher, museum security guard). How have they made you a better writer?

A better person, maybe?  Or a person who’s more aware of how lucky I am to have time to write, of a job where such a thing as writing is valued?  I guess I believe that many of my problems in the past were tied to believing that I was a writer–that it was an identity or calling of some kind–when actually I am just a person (or a spirit in an envelope of skin, for a time) who sometimes likes to write.  I mean, I’m not always writing.  Certainly, also, working those jobs put me in contact with all manner of interesting people and animals, and true lonely boredom, and–here I think of security guard work, as well as the years I worked as a temp, more than my ranch hand days–a way to value time.  I do think that my relationship to writing was more direct or easier when my job didn’t so immediately involve talking about writing, as it does now, in my imposter professor role.  In a larger sense, of course, writing fiction is about empathy, or about traveling in the minds and feelings of a person who is unlike yourself, who is doing things you’re not doing, so having a variety of experiences or identities must be helpful?

9. We both share a love for distance swimming. Why do you prefer to swim in open water and do you ever get story ideas while swimming?

I like not having to turn around.  I like being afraid of what’s far beneath me.  I like that when you get tired, running, you can walk; and then you can lie down.  When riding a bike, you can coast.  With swimming, it’s deal or drown. Very occasionally I have story ideas while swimming, but I feel that it’s more of a time when things settle, where my mind is elsewhere. Especially very long swims, it’s much more mesmeric, like dreaming. Kind of like floating in isolation tanks, which you know I also do.

10. The gorgeous chapter ornaments in Klickitat were illustrated by Maria T. Middleton. I’ve been contemplating a tattoo of the scissors we see throughout the book. Do you have any tattoos that you are willing to share?  And if you had to get a tattoo of one of the illustrations which would it be?

I agree with your assessment of these ornaments. The scissors would be the one!  I get a tattoo every ten years, or I decide not to get one every ten years.  So far I have a fish hook on the arch of my left foot (when I was 20–long story involving reading The Golden Bough which is about native fishermen and shadow and soul slippage, among other magical things) and a “7” (another long story–7 reasons. Basically, it’s lucky) on the inside of my upper right arm. I also think the leaf and/or the knife could work out, and even the compass could be cool, but I say scissors.

I’ve run into several authors who get a tattoo for every book they publish.  But at this point I’d be in a circus! And I kind of feel like: I have the book, so do I need a tattoo?

Peter Rock lives in Portland, Oregon where he is professor at Reed College.